The Top Ten Awe-Inspiring Apple Stores in The World

There are six words/things that come to one’s mind when one thinks of Apple; elegance, compactness, design, sleek, attractive and…very expensive! No?

Apple has incorporated its mastery and originality of its designs into its flagship stores over the globe. The Apple Stores are literal architectural masterpieces and lie on the top-rung of contemporary architecture.

Each Apple Store has been designed keeping in mind the minutest of the details, to capture the eyes of its consumers, and to set affirm the fact that Apple is the trend-setter and way beyond the normal league. The establishment of Apple retail stores was one hell of a smart move and at the moment of writing this 395 Apple stores have been established over the world.

“The Apple stores have been responsible for [turning] the boring computer sales floor into a sleek playroom filled with gadgets” – NYT.

The Apple Corporation has received many architectural awards for the mastery it has shown over its store designs. The most unique and trend-setting features of the Apple Stores are a big fancy for glass; glass bridges, glass staircases, steel box structures, and complete glass cubes and the Genius Bar. Each Apple Store has set-up a Genius bar inside where customers are facilitated with technical advice and offer service and repair for Apple products.

That said, I would be introducing you to the most popular and top-ten of my personal favorite Apple Stores in the world. And, here we go.

Apple recently inaugurated its first official store in the Middle East, and also its biggest store around the world. The store is located in Mall of Emirates and is the first one in the UAE. The store boasts the same Apple theme of wooden furniture along with green trees. This isn’t the only Apple store in UAE, as exactly after 3 hours of opening this store; Apple inaugurated another in Abu Dhabi. 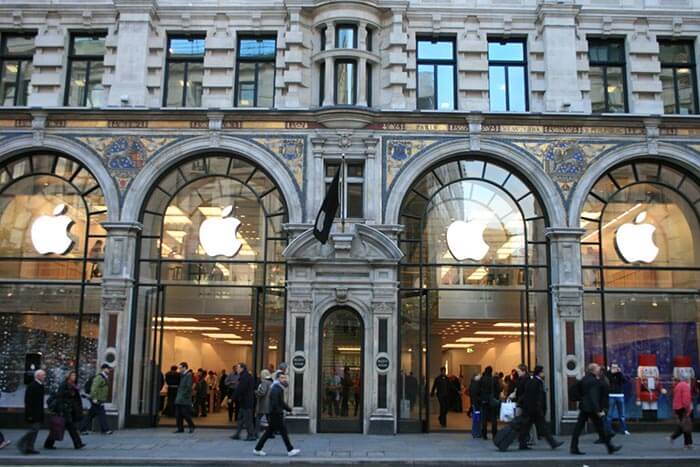 This is the largest Apple Store in the World. Located in a historical building of the Edwardian Period this store boasts of glass staircases, a glass bridge, and the beautifully illuminated glass ceiling, as its architecture. 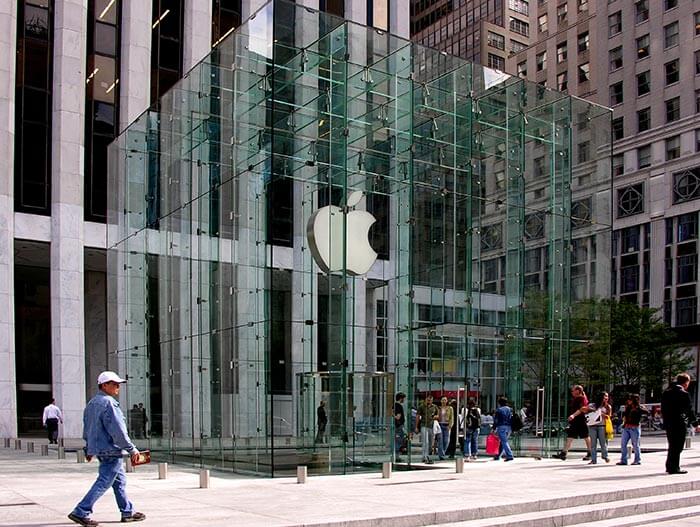 This Apple Store is pretty small compared to the rest of the Apple flagship stores. It boasts of an iconic 32-foot glass tube entrance which is why it attracts thousands of tourists from over the world. Hoards of fans keep waiting in queues outside to finally have the chance of seeing this iconic structure from the inside. 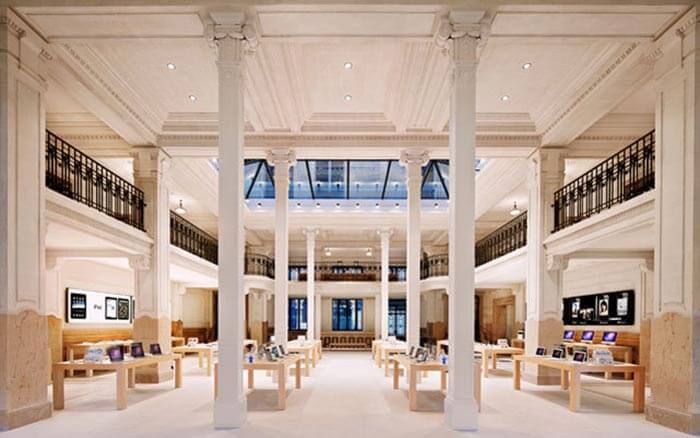 This Apple store has been established in a 130-year-old building. And has often come under both criticism and praise for its different architectural design interior than most of the other Apple store; the store has more of a romantic vibe to it, thus keeping with the French tradition. The store boasts of mosaic floor tiling, brass, and stonework, for its architectural creativity. 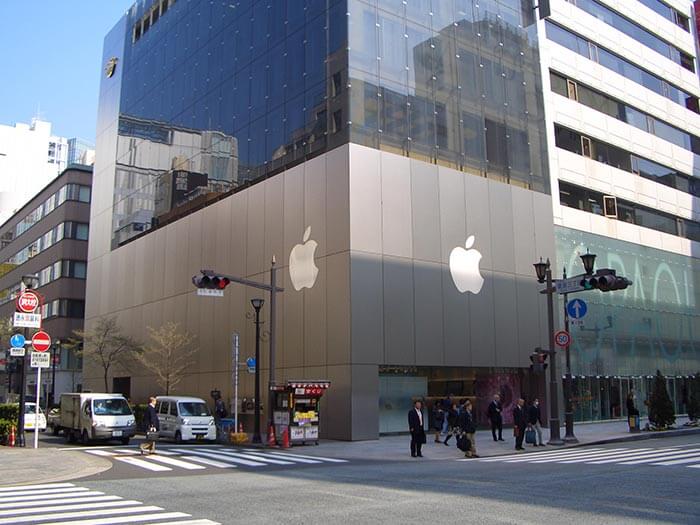 This is the tallest Apple Store in the world. Also, the first one to be established outside the States. Its unique architectural features are its stainless glass structure and a unique elevator which has no buttons at all. 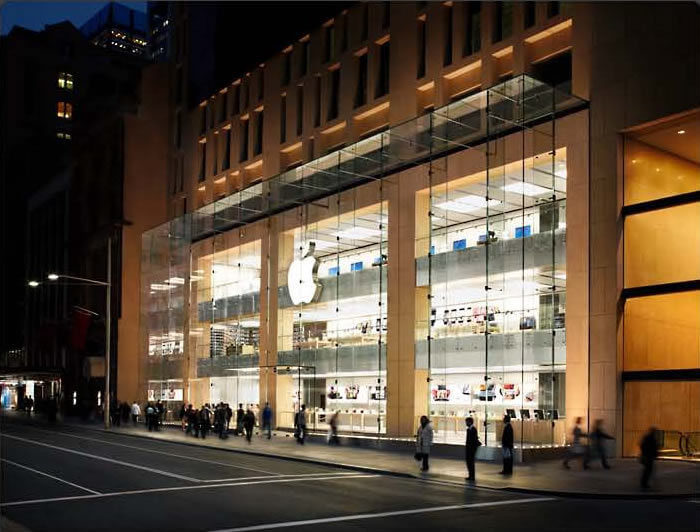 It is the 2nd biggest Apple Store in the world. Its outstanding features are the most massive Genius Bar of all Apple Stores and the Largest Apple Logo of all the stores as well. 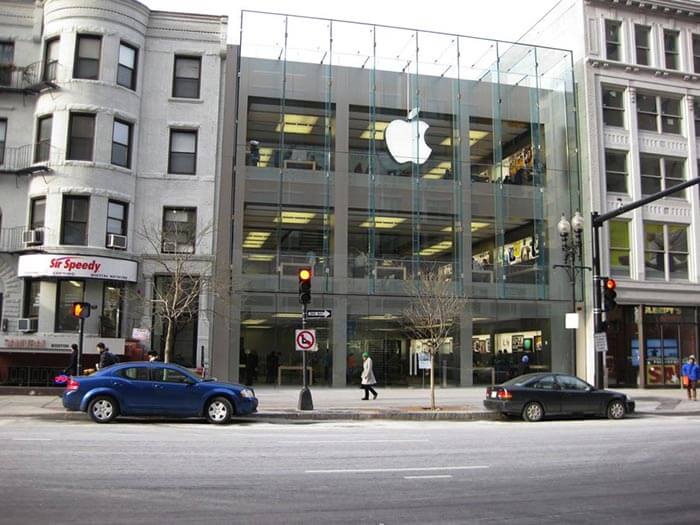 It is the largest Apple Store in the USA. Its unique design features are glass storefront and a garden rooftop. The garden rooftop is not accessible to the public. 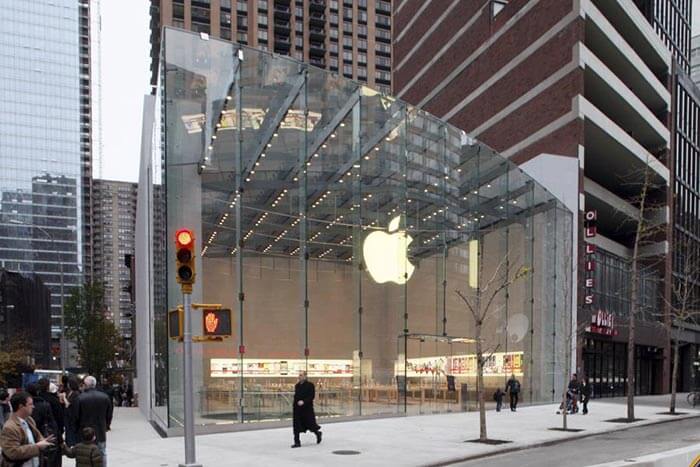 This particular Apple Store is said to be the most expensive Apple Store to be built, to date. Its enormous glass storefront entrance leaves one agape. The amount of stone used to build for this particular structure was the maximum of all Apple Stores. 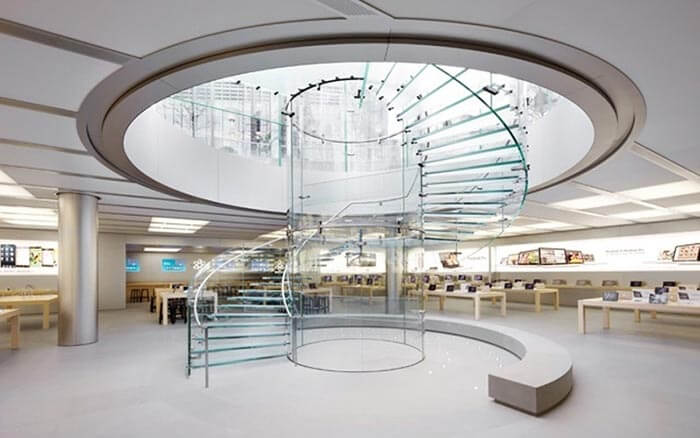 This Apple store is a below-ground store. And it is a beauty. Seriously. There is this towering glass cylinder that leads to a spiral staircase which ultimately leads to you the underground store. The architecture is mind-blowing. 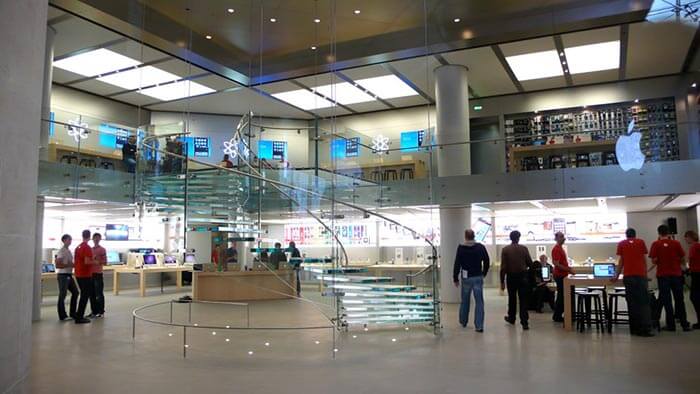 This Apple Store has been built right next to the Lourve pyramid of The Lourve Museum. It has two floors and an all-glass spiral staircase in the center. 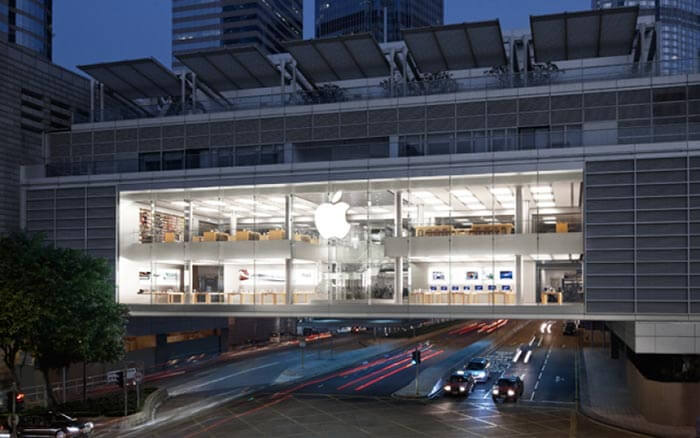 This Apple store has been the first one in Hong Kong. It is a Two-storey building connected to a shopping mall. Also has a technology-based play area for kids, on the second floor.

So, this was it; my virtual tour for you through the topmost architectural beauties of Apple. There are some other Apple Stores as well that I am in love with, but due to the constraint of making a list of top ten, I am unable to cover them over here as well. Let’s just keep them for some other day.

And let me know your favorites among the Apple stores as well. I look forward to your views. Share your thoughts and feedback with us in the comment section.