How to Use Markup on iPad and iPhone

The past year has been something of a dry spell for Apple in the hardware space, and it doesn’t seem like this is going to change anytime soon, if leaks of upcoming devices are to be believed. However, things are entirely different on the software side. The iOS 13 marks a paradigm shift, that in some ways, is as significant as the move to iOS 7.

This is the iOS version where the iPad finally gets the treatment it deserves, with the iPadOS fork. While it isn’t officially available, you can get a taste of iPadOS by installing the beta build if you have a developer account. We covered how you can do that, How to Download iPadOS Beta.

iPadOS brings a lot of productivity-oriented enhancements to the iPad. There are plenty of new features to write about; we’ll focus on the Markup functionality of the new iPadOS. This is a how-to article, and we’ll be showing you exactly how to use Markup to make the most out of your Pencil-equipped iPad.

How do you bring up the Markup interface on iPhone or iPad?

By taking a screenshot: It’s simple: If you want to use Markup with screenshots, swipe up from a corner of the screen: This’ll take a screenshot and present you with the Markup interface.

By tapping the Markup icon on compatible apps: A range of apps, including Messages, Mail, and Photos, to name a few, have a dedicated Markup button that looks like this: To access the markup interface in these apps, tap that button in-app.

How to Use Markup Tool on iPad and iPhone


The markup interface features a range of tools you can use to draw. The brush size, shape, and weight are helpfully delineated by different icons: The pen for sharp and thin lines, a marker for broader strokes, and a pencil for more delicate strokes. Each can be configured for weight and transparency.

Not happy with your Markup? The eraser gets rid of entire strokes in one go
The lasso select works only after you’ve drawn something with the other tools. It allows you to select individual brush strokes and then move them around.

The color options to the right allow you to pick a color for your markup strokes. If you’re not happy with the five default colors, there’s a broader palette option to the right.

Lastly, the plus icon hides some of Markups’ most useful tools: A signature tool for e-signing your documents, a text box tool, quick shapes, and a magnifier.

Learn To Use the Markup Tools in iPadOS and iOS 14


Using Markup, you can:

Let’s take a look at these, one by one. Editing screenshots is simple: as we mentioned earlier, merely swiping up from the corner will bring up the Markup interface, allowing you to edit a screenshot on the spot.

How to Use Markup to Put Signatures on PDF’s, Documents in iPadOS and iOS 14


If you want to sign a document before printing it out, you’ll want to do the following:

Step #1. Open up a PDF or document file.

How to Use Markup in Messages App on iPad and iPhone


You can use Markup tool for a little extra fun in Messages, it’s simple. You’ll need to:

Step #1. Open up Messages app on your device.

Step #2. Open any conversation or start a new one.

Step #3. Tap the photo icon and select a photo.

Step #4. Tap the photo when it’s in the message and then tap the Markup icon → Use Markup as needed, then tap on Save → Tap on Up arrow blue icon to send.

How to Markup, Write, and Draw on Photos in iPadOS and iOS 14

If you want to use Markup to make necessary edits to photos: 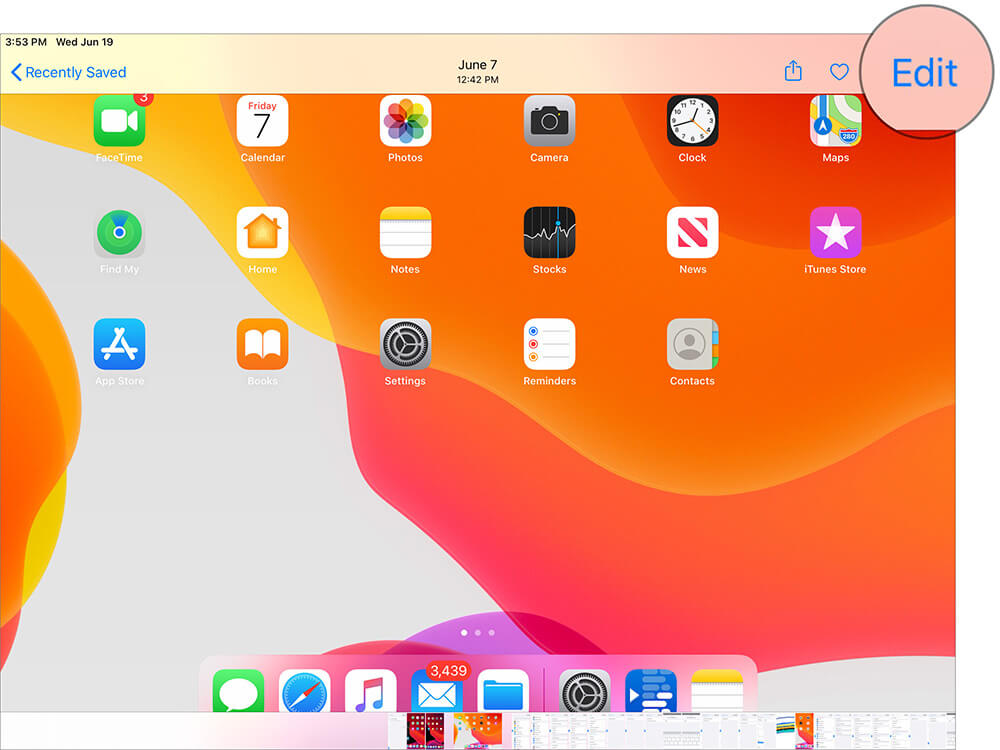 Step #3. Tap on the Markup icon → Use Markup as needed, then tap Done.

How to Use Markup in Notes App in iPadOS

Step #1. Open up Notes app on your device.

Step #2. Open an existing note or create a new one.

Step #3. Tap on the Markup icon and use Markup as needed.

That’s all for now folks. I hope this detailed guide on using Markup in the new iPadOS has helped you.

Keep in mind, any app that supports Markup functionality will have a markup icon. Tapping on that will bring up the Markup interface for you to use. Well, that’s a wrap. iPadOS 13 features a boatload of added functionality, capable of turning your iPad into a genuine productivity machine. Stay tuned here for more How-to’s!