When the iPhone keeps restarting over and over again, the whole iOS experience seems to get stuck in a boot loop. Been there, done that, I can feel the agony that you may be going through right now. Enough of the random boot loop, it’s time to look for the fixes to take control of the unexpected rebooting of the iPhone.

Why Does My iPhone Keep Restarting Itself?

From what I have experienced, a software bug is often behind the random rebooting of the iPhone. But that doesn’t mean other culprits like problematic apps, nasty drops or cluttered storage are less responsible for the chaos. Not just that, third-party certifications installed by tricking iOS devices and faulty chargers that often cause the iPhone to restart itself while charging are also usual suspects.

What to Do If Your iPhone Keeps Restarting?

Now that you know what could be behind the issue, I guess you may have already started asking: What to do if the iPhone keeps restarting time and time again? Well, look no further than these solutions as they have you fully covered.

Once in a while, a random glitch tends to sneak in and begins to cause problems. And when that happens, a hard reset comes to the rescue more often than not. So, if your iPhone keeps restarting the loop, the first thing you should do to get rid of the problem is to go for the force restart.

2. Update Software On Your iPhone

Has your iPhone started to reboot repeatedly after the iOS 13 update? If yes, this issue could very well be due to a software bug. And the right way to troubleshoot it is to go for the software update. Open Settings → General → Software Update. Now, follow the usual process to download and install the software update.

3. Remove the SIM Card and Reinsert It

Though not many of you may believe, iPhones tend to get stuck into the restarting loop if the device’s connection to the wireless carrier is facing a problem. Thankfully, one of the easiest and reliable ways to fix this connection issue is just by removing the SIM card and putting it back inside.

First off, shut down the iPhone. After that, use the ejector tool, which comes with the iPhone in the box, to pop out the SIM tray and then remove the SIM card. After that, wait for some time and then reinsert the SIM.

4. Determine If an App is Causing Your iPhone to Restart

If the problem continues even after the software update, track down the problematic apps and remove them. So, how do you figure out which apps are behind this issue?

Well, iOS comes with a feature called Analytics that works effectively in diagnosing issues. After a thorough test, it digs out the problematic areas, making it a little easier for you to find out the culprits. 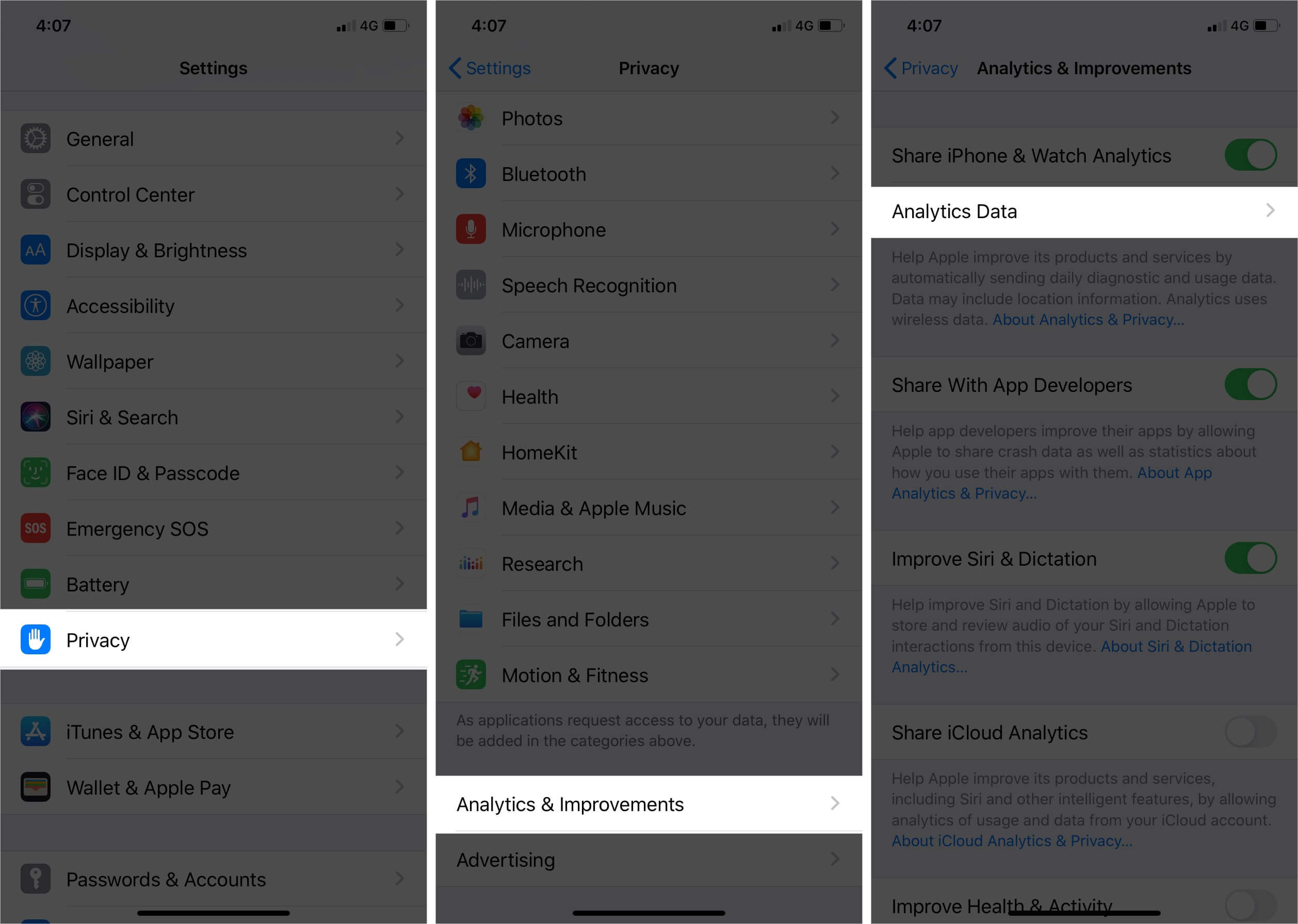 Now, scroll through the entire list and spot the apps that might have been listed repeatedly. Once you have discovered those apps, removing them from your device could solve the issue.

Delete All The Outdated Apps

Outdated apps tend to create a lot of problems. They may not only cause your iPhone to crash unexpectedly but also affect the overall performance of the device. So, if your device has some apps that haven’t received updates for a long time, make sure to wipe them out.

In iOS 13, there are multiple ways to delete an app. One of the easiest ways is to touch and hold an app and then tap on the Delete App option in the popup that appears. After that, tap on Delete again to confirm the action. 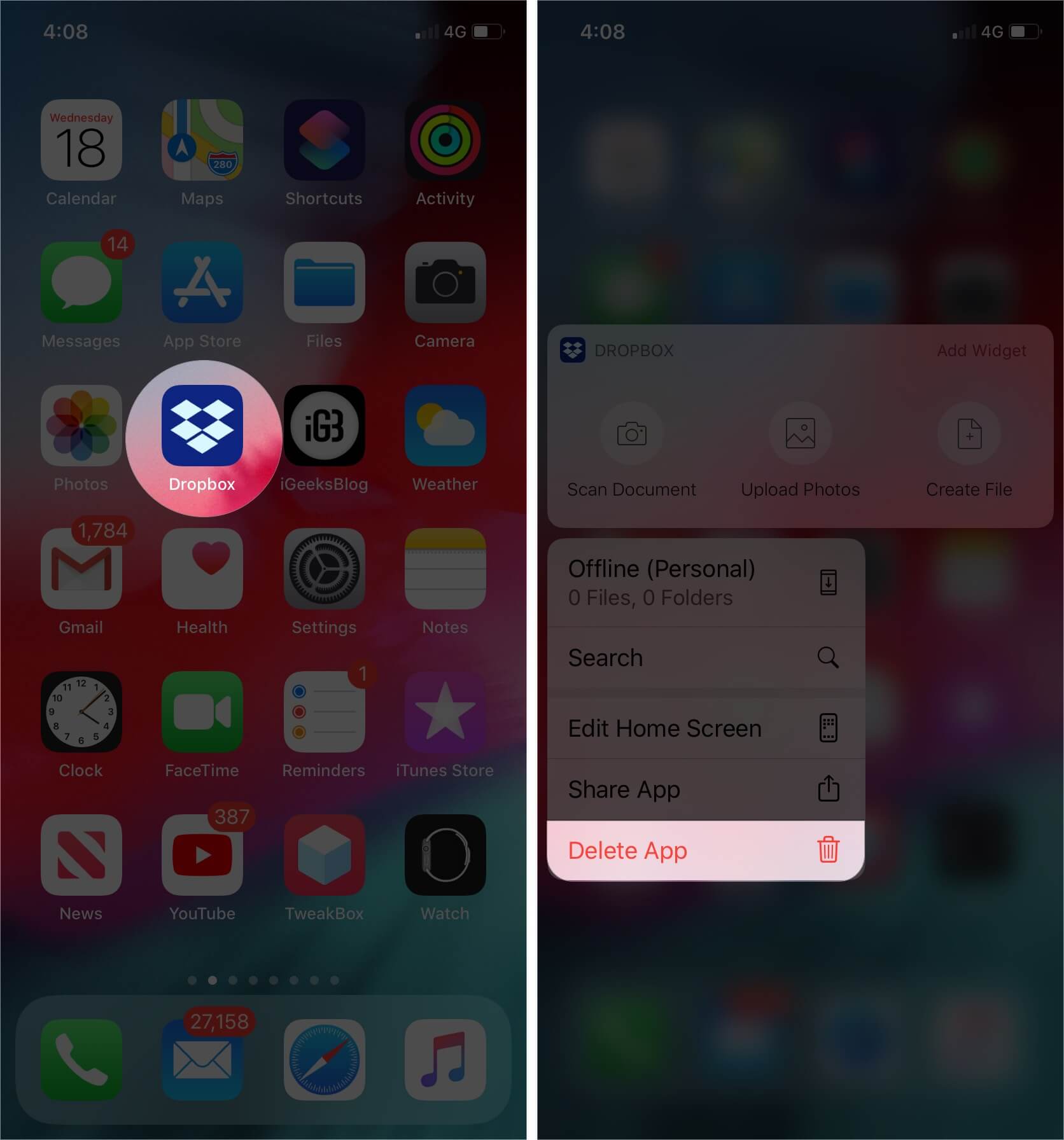 On iOS 12 or Earlier

Simply touch and hold an app and then hit the “X” button. Next, hit the Delete button in the popup menu to finish.

Most apps receive updates frequently for both performance improvements and bug fixes. And the best way to keep all the apps updated is to take advantage of the “Automatic Updates” feature (Settings → iTunes & App Store → App Updates). 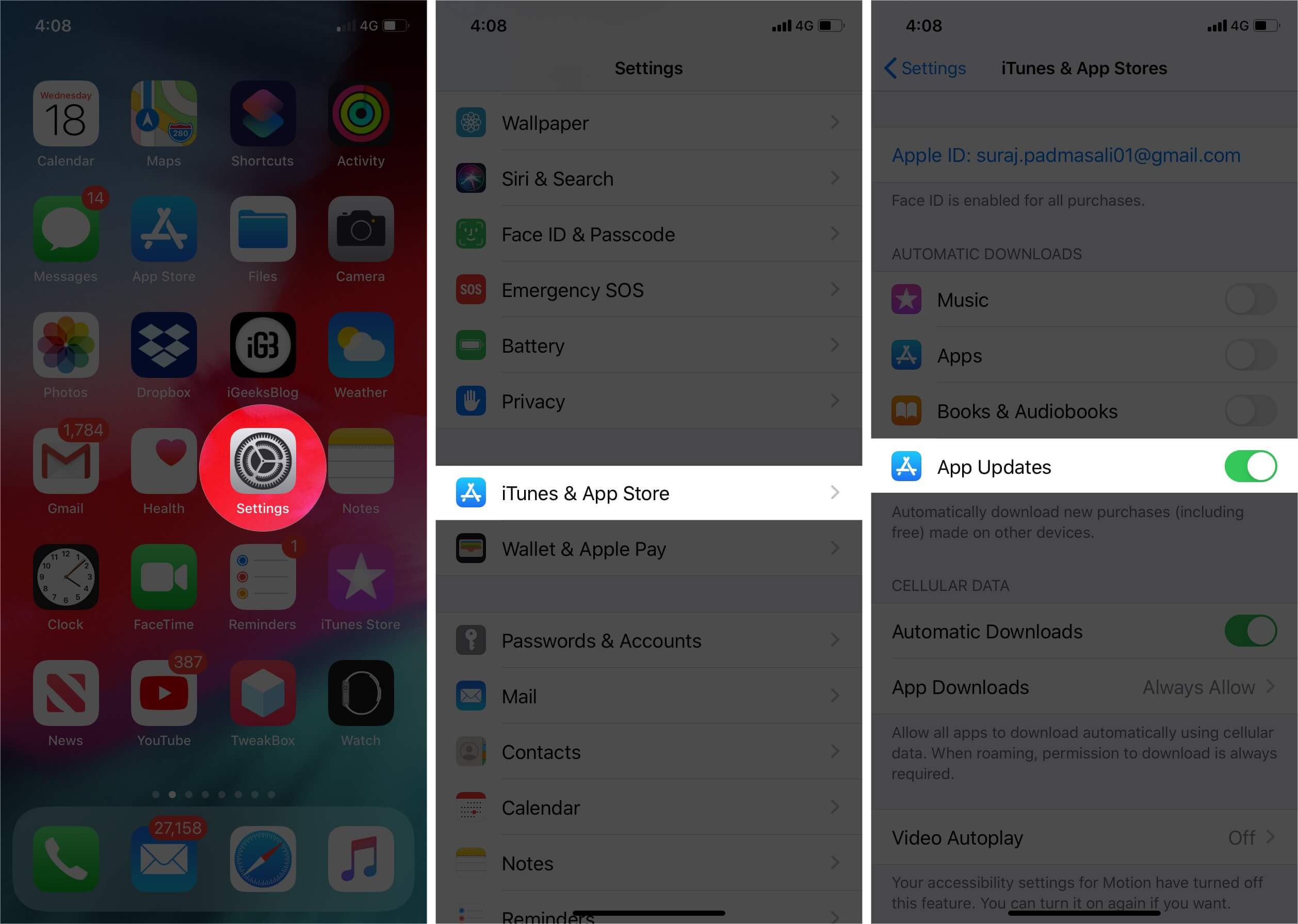 You can also update apps manually as and when you want. To get it done, head into App Store → Your Profile → Hit Update All to update all the apps installed on your iPhone at one go. 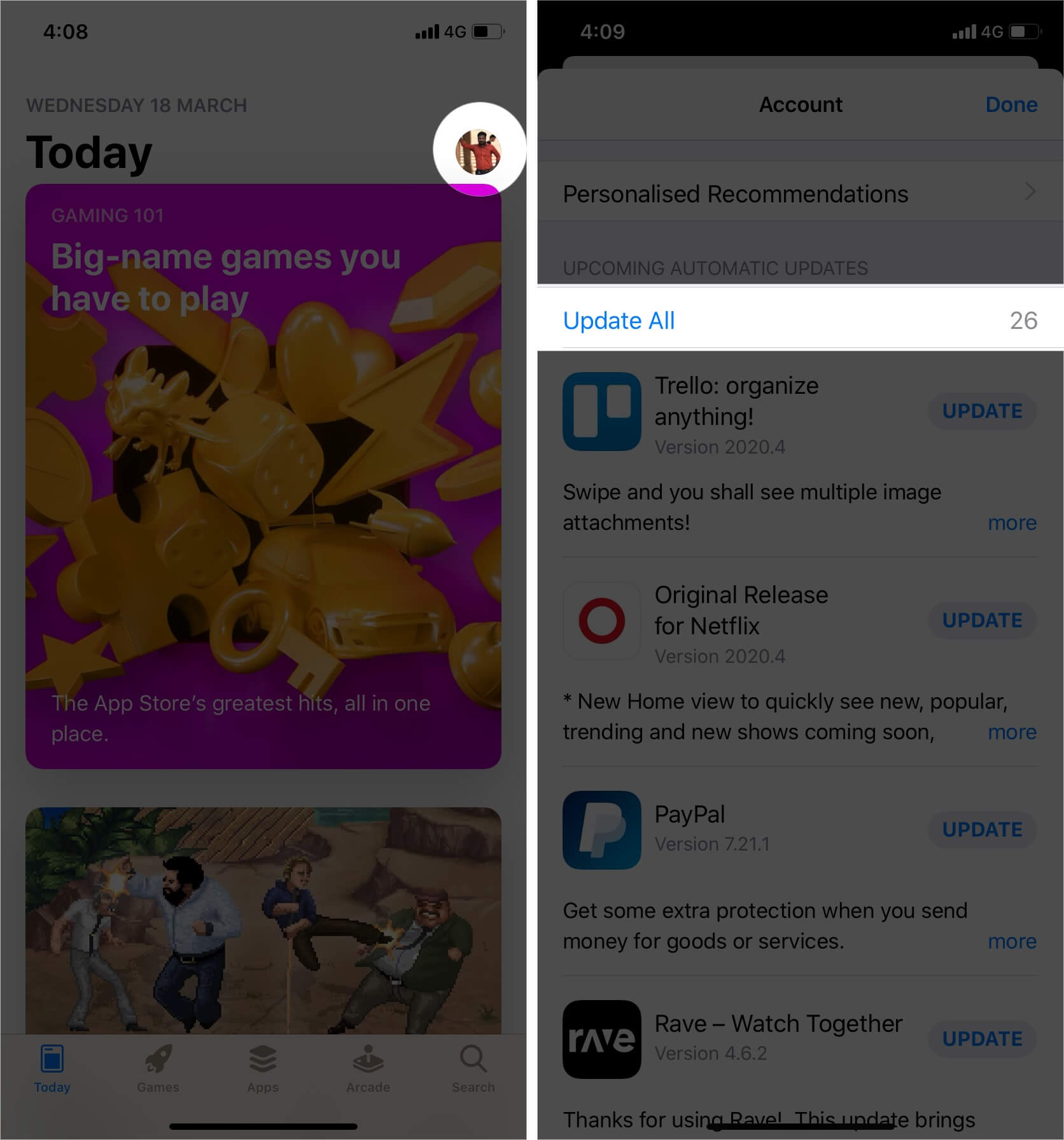 6. Clean Up Your iPhone

If your iPhone still keeps restarting the Apple logo, cleaning up the entire device may help in fixing the problem. Corrupt files or cluttered storage could be at the heart of this issue. But before going for the marathon cleanup, do not forget to back up all of your important files.

To help you track down all the storage hogging files and delete them with ease, we have made a complete guide. So, hop onto it to remove unnecessary files carefully.

Just in case, you find the process of removing useless files manually a tedious affair, check out these storage cleaning apps for iPhone.

Now, we are going to wipe out all the existing settings and put the device to the default state. Yeah, this solution sounds radical, but it often proves to be handy in getting rid of common problems. So, let’s hope that it’s able to resolve the issue. Head into the Settings app on your iPhone → General → Reset → Reset All Settings. 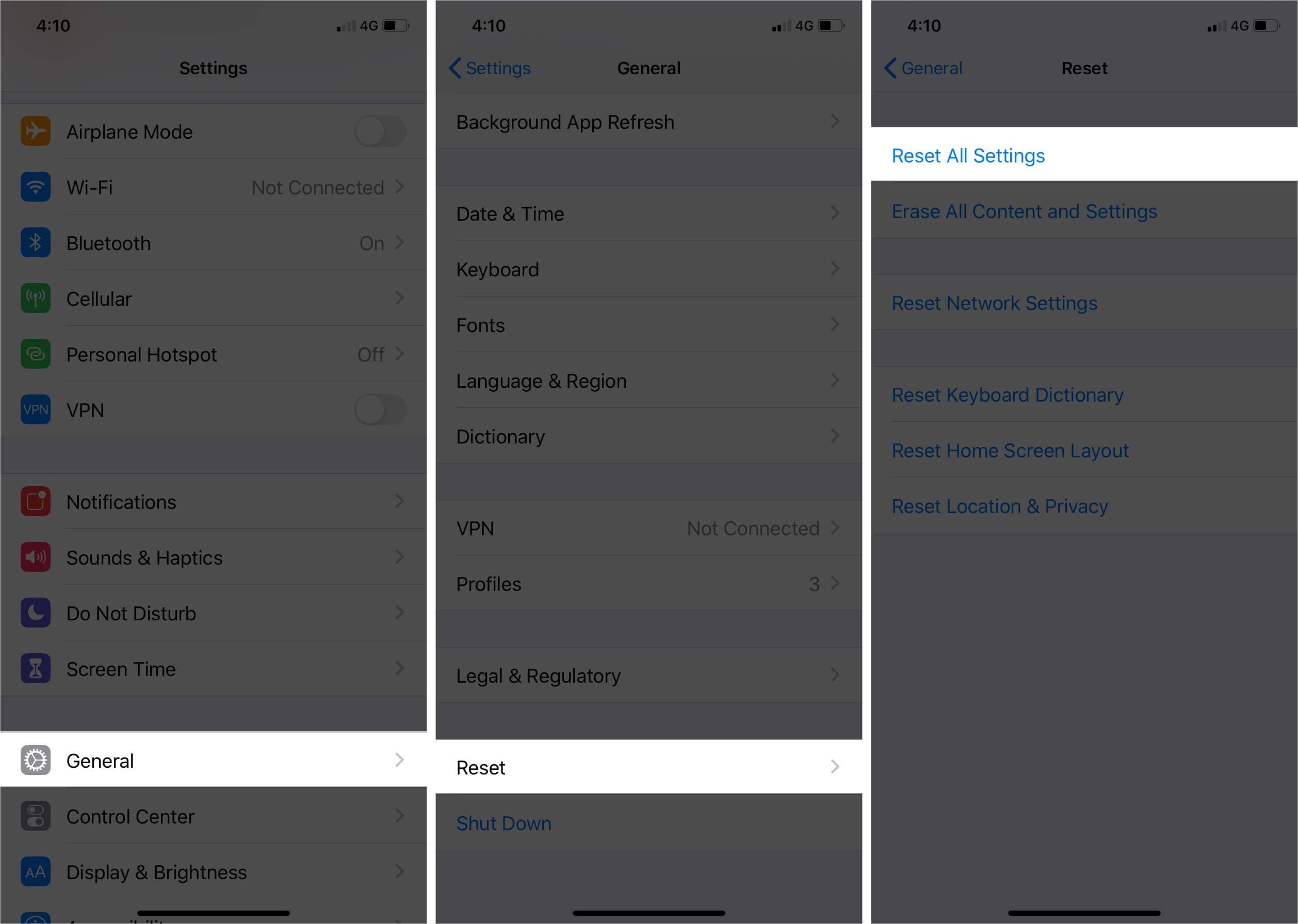 8. Check for a Hardware Problem

Repeated drops also cause the iPhone to get stuck in the boot loop. If your device had recently met with a nasty drop, there could be a hardware problem.

Besides, the worn-out battery may also be behind this problem. If it’s found to be the culprit, you can get rid of the issue just by replacing the faulty/worn-out battery.

If your iPhone keeps restarting while charging, make sure the Lightning port is clean. The pocket lint, dirt, and debris may have piled up over time and maybe preventing the smartphone from charging. So, clean the lint and gunk stuck in the charging port and then try to charge the device. If the problem doesn’t stop, try to charge your device with another cable.

Though third-party services charge a lot less, Apple Support is more reliable. So, if you don’t mind spending a few extra dollars in favor of a trusted solution, contact Apple for help.

9. Restore Your iPhone As New

Restoring iPhone as new is something that I often save for the last as it’s known as the last resort as far as fixing software problems are concerned. As it has a very good record of resolving stubborn issues like Wi-Fi and Bluetooth, I hope it succeeds in troubleshooting this problem as well.

But before going ahead with the following steps, don’t forget to back up all of your data as it will wipe out everything that your device consists of. So, get it done without any fail.

Now, check out if the problem is gone. If it has, you are good to go! But if it’s still there, try to restore your iPhone in Recovery Mode. To get through the steps problem, head over to this detailed guide.

So long as there is a software issue, your iPhone would come back to normal after software update and clean restore. In the event of a hardware problem, contacting Apple Support is always the right way to go for a reliable solution. Of course, Apple charges a lot more than third-party services, but when it comes to reliability, the first party solution always has the upper hand.

More Troubleshooting Guides To Rescue You:

Have you succeeded in fixing your iPhone that keeps rebooting itself? If yes, toss up your thoughts in the comments.