Nothing annoys me more than an ill-functioning microphone as it completely spoils the calling experience. Not just that, it even causes miscommunication at times. While hardware is believed to be the main villain behind the iPhone microphone not working issue, random software glitch often proves to be a hidden culprit.

So, when you are up against a muffled mic, you’ve got to keep both these aspects in mind while looking for a fix. To save you from going through a long workaround, I’ve lined up some possible solutions including a few proven hacks. So, whether your iPhone microphone is not working on video calls or has started to misbehave after the recent software update, they can rescue you.

Why is My iPhone Microphone Not Working? 10 Solutions to Fix the Issue

Preliminary Solutions to Troubleshoot the Ill-Functioning Microphone on iPhone

To start things off, we are going to first try out some basic solutions that can resolve the problem right away, if it’s due to usual suspects.

Even though it may sound a little funny, tiny particles of lint or dust could be the reason why your iPhone microphone is not working. So, just in case the sound of the microphone seems to be muffled or doesn’t come clearly, chances are pretty high that dirt/lint might have covered them. Yeah, you heard it right! The culprit behind this mess could well be tiny particles of lint.

The better way to remove dirt from the iPhone’s microphone is to brush on the openings using a soft bristle toothbrush. Make sure to gently brush the microphone opening to remove any debris that may have accumulated over time.

If the iPhone microphone is not working during calls, ensure that it’s not covered by your hands during calls. Besides, remove the screen protectors, films, or cases, which might have covered the microphone, iSight mic, or the receiver. After removing these accessories, check out if the mic has started to behave normally.

The connected Bluetooth devices might be the main culprits. So, disconnect all of them from your iPhone and then restart the device.

Launch Settings app → Bluetooth → tap on the “i” button next to the Bluetooth accessory. Then, disconnect the accessory from your device. Now, restart your device.

Once the device has rebooted, make a call to your friend to check if the problem is gone. If you have got rid of the issue, you are good to go!

Is Your iPhone Microphone Not Working in a Specific App? Check Out the Microphone Setting

If the iPhone microphone is not working in a specific app like WhatsApp, ensure that you have allowed the app to access the microphone. Maybe you didn’t permit the app to use the microphone, or maybe you had accidentally turned off the toggle. Whatever could be the reason, be sure you haven’t restricted it.

Open the Settings app on your iPhone → Privacy → Microphone. Now, find the app in question and then turn on the switch for it.

Some users who had run into this problem suggested that turning off noise cancellation solved the problem. For those unfamiliar, it decreases the ambient noise on phone calls, especially when you are holding the receiver to your ear.

So, I would recommend you to try it out as well. To get it done, head into Settings app → Accessibility → Audio/Visual. Now, turn off the switch for iPhone Noise Cancellation.

Sticky Note: On iOS 12 or earlier, head over to Settings → General → Accessibility and then turn off the toggle for iPhone Noise Cancellation.

Now that you have tried out the basic solutions, it’s time to test the microphone to figure out whether or not it’s damaged.

What to Do If the iPhone Microphone Not Working During Video Calls?

If the people you are talking with can’t hear you on video/FaceTime calls, try out this voice memo trick. What makes it so handy is the ability to figure out if the microphone is at fault or something else is causing the problem.

Step #2. Now, record your voice by speaking anything that comes to your mind. Once you have recorded your voice, tap the play button to play the recording. If you can hear the voice, the microphone is in good condition.

But if you aren’t able to hear the sound, check out if the cellular connection is in good condition. If it’s poor, it could be the reason behind this problem.

Swipe up/swipe down from the top right to access the control center and then turn on airplane mode. Now, wait for some time and then, turn off airplane mode. Check out, if the cellular connection has come back to normal. If it hasn’t, try out these tips to fix it.

What to Do if the iPhone Microphone Not Working on Speaker or When You’re Using Speakerphone?

If the microphone isn’t working when you are using a speakerphone, this Camera app trick can let you quickly find out if the mic is damaged or at fault.

Step #1. Launch the Camera app on your iPhone.

Step #2. Now, while speaking at the top of the device, record a video.

Step #3. Next, hit the camera chooser button to switch to the other camera to shoot another video while speaking at the top of your iPhone. Once you have recorded the video, play it. If you can hear the sound of the video, there is no problem with the mic. But if you can’t, the mic could be at fault.

You can also use Siri to check if the mic is properly or not. Simply invoke the virtual assistant using the Hey Siri phrase or press and hold the Home/side button and then ask any question to it. If you can hear the answer, the mic is working well. If you can’t, the mic needs to be serviced.

In this segment, we are going to try out the fixes that have proved quite reliable in resolving the mic issue, if it’s software related.

You didn’t expect me to give this handy troubleshooter a miss, did you? If none of the solutions could sort out the microphone not working issue on your iOS device, force-restart the device. As it’s well-known for fixing occasional software glitches, you can count on it to restore the normalcy.

Keep in mind, the process of force restarting an iPhone varies depending on the device model. So, do check out the right method as per your device. 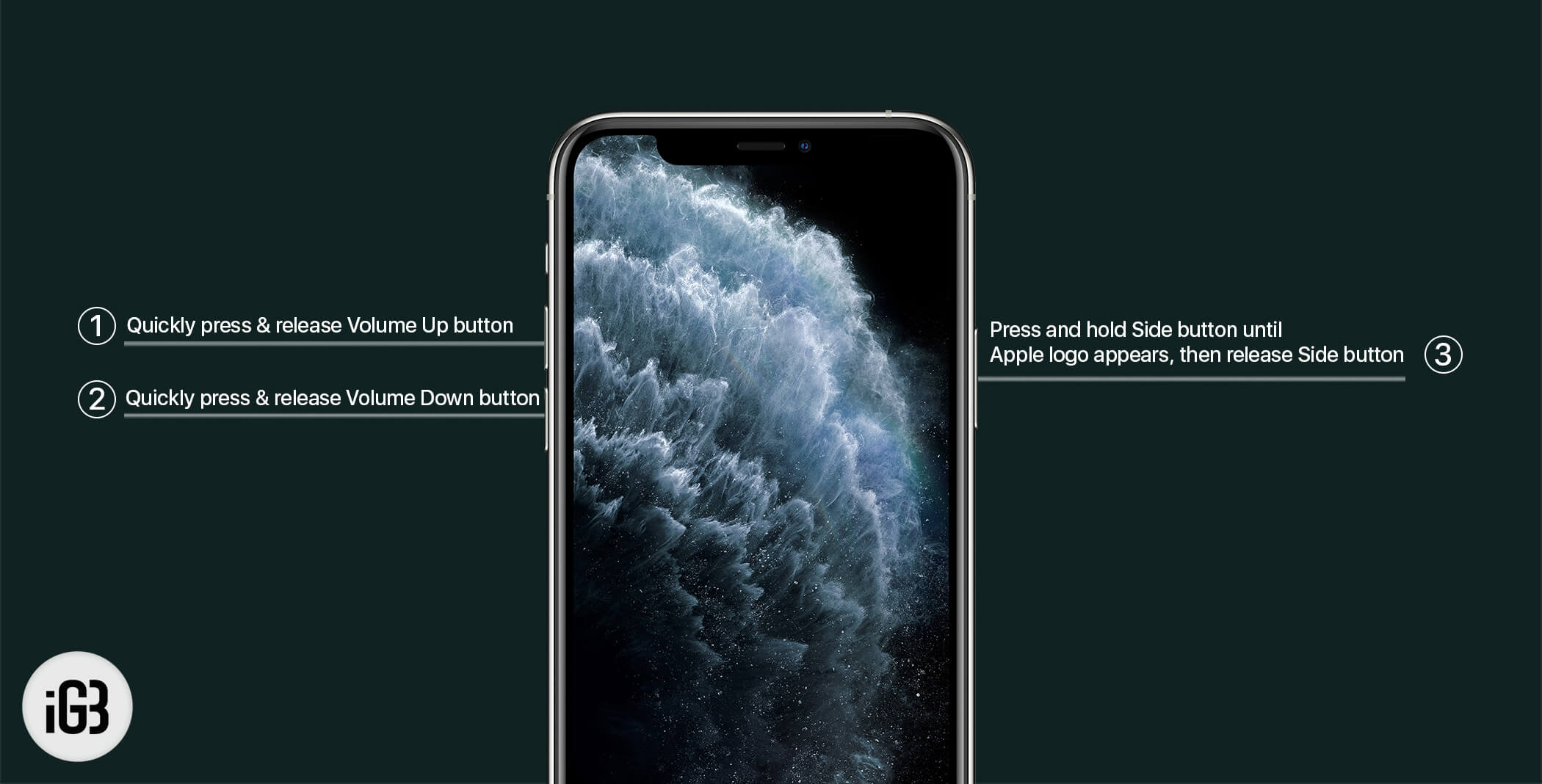 Press and hold the sleep/wake button and volume down button until you see the Apple logo on the screen.

On iPhone 6s or earlier and iPad:

Press and hold the Home button and the sleep/wake button simultaneously until the Apple logo appears on the screen.

If the microphone is still ill-functioning on your iPhone, it’s time to go for a radical solution. And with it, I mean resetting the device to factory default, wiping out all the existing settings. Bother not, iOS will keep all the stored data and apps safe.

Open Settings app on your iPhone → General → Reset. Now, tap on Reset All Settings and confirm the action.

Update the iOS on your Device

If your iPhone microphone is not working after the update, the problem might well be due to a bug. In this case, updating the software is the right way to go. Every iOS update comes bundled with several bug fixes and performance enhancements, so hopefully, it can get rid of the problem.

Step #1. Launch the Settings app on your iPhone → Tap on General.

Step #2. Tap on Software Update → Next, download and install the update, if it’s available.

What If Nothing Works? Contact Apple Support, If the Issue Still Persists

If the issue hasn’t yet been resolved, the microphone could be damaged. And in this scenario, it’s better to contact Apple Support to schedule an appointment with an Apple Authorized Service Provider or with the Genius Bar at an Apple Store.

There you go! I guess you have taken control of the issue and brought the microphone on track again. Here is hoping that your calls will no longer be hampered by the ill-functioning mic.

By the way, which one of the above solutions helped you sort out the mic? We would be glad to know your feedback. To stay in tune with all-things-Apple and other tech news, download our iGB app, and be sure to follow us on Twitter, Facebook, and Instagram.