Dictation Not Working on iPhone? Here’s How to Fix It

Whenever I don’t feel comfortable to type, I take advantage of the ever-reliable “speech to text” feature on my iPhone to easily compose a text. In most cases, it does a pretty good job. But then again, nothing is perfect in the world. And there have been quite a few times when I found dictation not working at all on my iPhone.

Considering how user-friendly this feature is, I thought it makes sense to share some workable tricks to troubleshoot the voice-to-text issues on the iOS device. Give them a chance if you have run into this hurdle and want to troubleshoot it right away!

Is The Microphone Icon Greyed Out?

The “speech to text” feature requires a stable Internet connection to work perfectly. When your device is not connected to the Internet, the microphone icon turns grey.

So, make sure you have a proper Internet connection.

After that, open any app like Messages or Notes and try to use dictation as usual. It should work now.

What if the microphone icon is still grayed out, even after you have refreshed the Internet connection? There could be network issues on your device. But do not worry, as there is a reliable way of fixing it by resetting the network.

Now, try to use the voice to text feature as usual. The problem should be gone now!

Solution #3: Make Sure Siri & Dictation Is Not Restricted

Does the keyboard not show up the microphone button? If it’s the case, I know the exact reason behind it because I have gone through this path a few times.

Maybe you had restricted Siri & Dictation earlier and forgot to remove the limitation or maybe your kid had unknowingly put a break on this speech to text feature. Whatever could be the case, go to Settings → Screen Time → Content & Privacy Restrictions → Allowed Apps → now, make sure the toggle for Siri & Dictation is ON.

Microphone Icon Is Not Grayed Out But Still Can’t Use Voice to Text Feature?

Solution #4: Give A Fresh Start to Siri and Dictation

In another scenario, the voice dictation doesn’t seem to work even when there is no problem with the Internet, and the microphone icon isn’t grayed out either.

In such a case, giving a fresh start to both iPhone and Siri Dictation could do the trick. Well, the reason why I feel a bit optimistic about it is that it has worked for many users. Anyway, let’s try it out!

Then after, disable Dictation. To do so, head over to Settings → General → Keyboard → Dictation.

Next, you need to force restart your device. As the process slightly varies based on different models, check out this guide if you need help.

After your device has restarted, go back to the Settings and turn on Listen for Hey Siri and Press Home/Side Button for Siri. Also, enable Dictation. Now, check out if you have finally eliminated the problem. 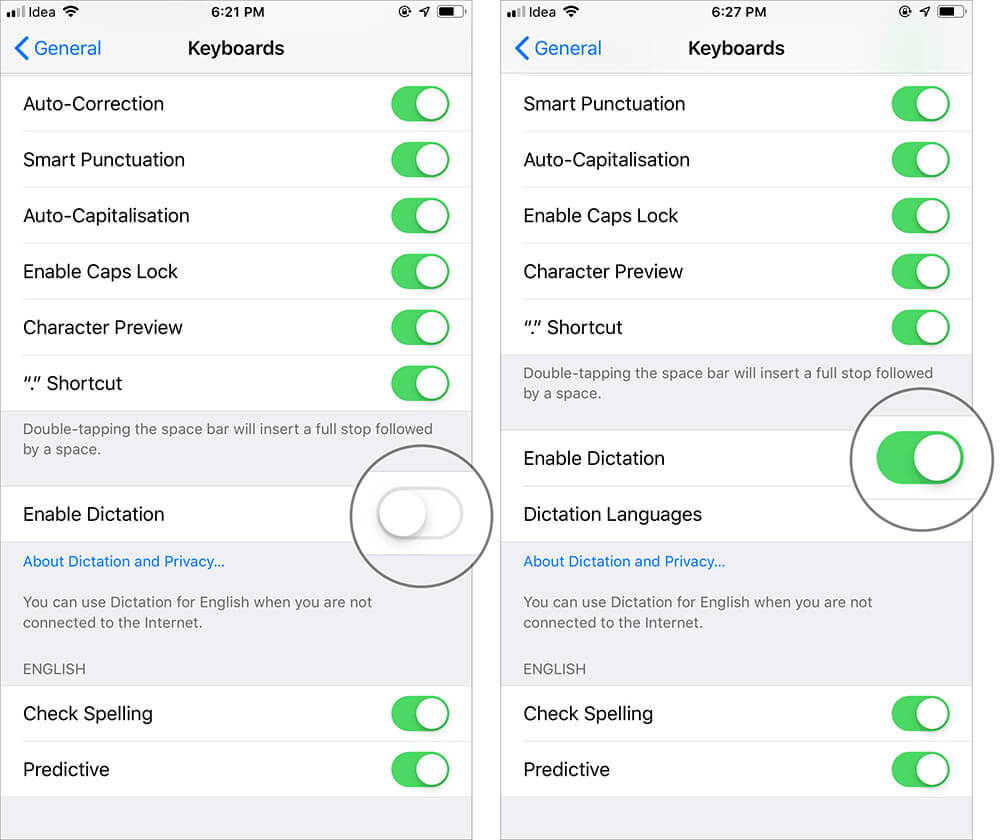 Solution #5: Update iOS On Your Device

No respite as yet? I suspect the problem could well be due to an adamant bug. To get rid of the bug, update your device. Go to Settings app → General → Software Update. After that, download and install the available update.

Solution #6: Restore Your Device As New

In most cases, the software update could troubleshoot the problem but if it also fails to offer the needed outcome, restore your device as new.

Yes, it’s the most unwanted solution as no one ever wishes to do it. But then again, we shouldn’t leave any stone unturned in the search of a fix. So, try it out as well. To get it done, head over to this hands-on guide.

Got the answer to the problem? I guess you’ve finally sorted out the issue for good and started using dictation as usual. If you ever come across the same hurdle in the future, do keep the tricks in mind to troubleshoot it right away.