Apple Watch just made timekeeping more efficient with its latest watchOS6 update. Instead of glancing at your wrist ever so often, allow Taptic Time on your Apple Watch to give you haptic taps for time.

Taptic Time was earlier limited as an accessibility feature and could only be enabled with the built-in VoiceOver screen reader. But in the watchOS 6 update, it becomes a part of the Sounds & Haptics section.

If you haven’t yet updated your Apple’s watch operating system, we just give you one more reason for it. You can also update the software directly on your Apple Watch, check out our guide for the same.

Once you activate Taptic Time on watchOS 6, variant length of haptic taps will notify you about the current time. Moreover, you can select the patterns of the distinct haptic feedback you will receive; from hourly long taps to Morse code taps.

How to Enable and Use Taptic Time on Apple Watch

The Taptic Time feature comes with three options, the haptic feedback on your wrist will be according to the chosen option. Here’s what the watch says about each option:

Step #2. Scroll down to Sounds & Haptics and tap on it.

Step #3. Scroll down to Taptic Time and tap on it.

Step #4. Turn the toggle next to Taptic Time ON.

Step #5. Currently the default option, i.e., Digits will have a checkmark next to it as it is activated. You can tap on the other two options Terse or Morse code to activate them.

Step #6. Exit the Settings app to save the changes.

We often keep our iPhone, Apple Watch, and other devices on silent at work and in public places. But after activating Taptic time, whenever your watch is in Silent Mode you don’t have to see the time; just feel it on your wrist with Taptic time. That’s not all, tap and hold two fingers on the watch face and a haptic version of time will be tapped on your wrist.

How to Enable Taptic Chime on Apple Watch

Furthermore, if your watch is on the ringer, it chimes a sound similar to a robin chirping alerting you about the time. Identical to the Taptic Time, you don’t have to check your watch, the feature will subtly alert you about the passing time.

Step #2. Scroll down to Sounds & Haptics and tap on it.

Step #3. Scroll down to Taptic Chime and turn the toggle ON.

Step #4. Two options will appear, choose as per your convenience. 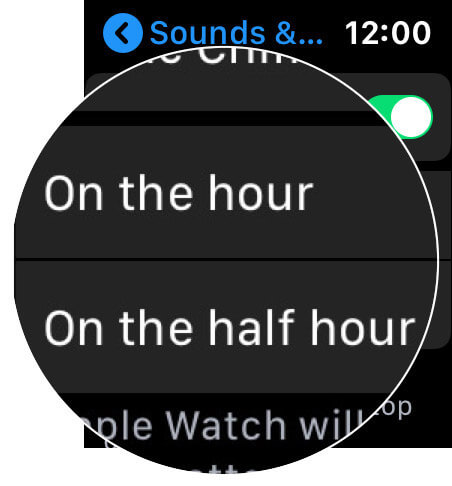 Wait!! Before you start counting your blessings for buying an upgrading your Apple Watch to watch OS 6, there is one more feature you should know about.

How to Enable Speak Time on Apple Watch

You might recognize this feature as Tap to Speak Time toggle that was earlier only available for the Mickey and Minnie faces. The new Speak Time feature in the watchOS 6, will enable Siri to announce the time whichever watch face you are using.

All you have to do is activate the feature and tap and hold two fingers on the watch face.

Step #2. Scroll down to Sounds & Haptics and tap on it

Step #3. Scroll down to Speak Time and turn the toggle ON

Step #4. Two options will appear, choose as per your convenience.

Note that if Speak Time is activated and configured to Always Speak, Taptic Time will be unavailable.

That’s it for now

It seems that Apple Watch is getting smarter by the minute; it now tells time visually, verbally, and haptically. Earlier these features were incorporated to aid the visually impaired; however, now their audience has expanded.

Whether you are a multitasker, or a schedule strickler or someone who is trying to be one of them, the Taptic Time, Taptic Chime and Speak Time feature will be utilitarian.

Do try these features and let us know your feedback in the comment section below.

Nikhil runs iGB’s official YouTube channel. He is the official lensman of iGB and GB’s small studio is Nikhil’s playground, where he does all wonders with his remarkable signature. When Nikhil is not in his studio, you may spot him in a gourmet restaurant, chomping his way through some delicious food. He is a great traveler, who can go for long drives in search of good food.