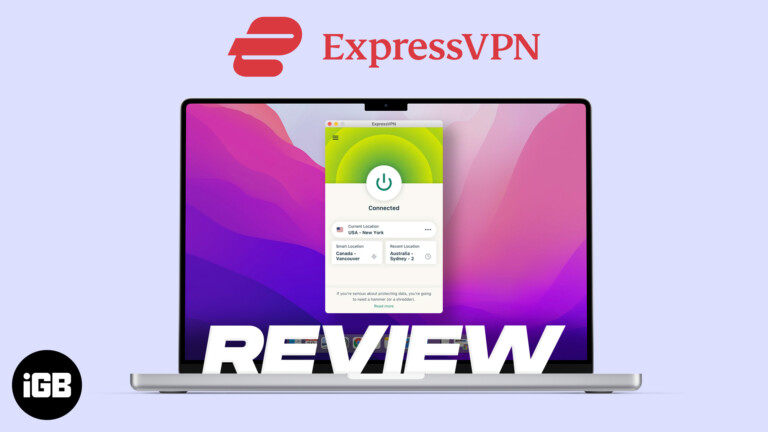 “We believe security shouldn’t come at the expense of individual privacy.” ~ Apple

Apple always boasts about its policy of individual security and privacy while announcing its products and services. But the brand cannot prevent any third-party apps like Google and Facebook from tracking users’ activities. To protect digital presence, users have to rely on VPN apps and services. Then again, which VPN apps to use? While there are countless VPN apps for iOS device, getting the best is like finding a needle in a haystack.

And we got ExpressVPN a couple of days back. It is a trusted leader in VPN as there is more to this service than 30-days money-back guarantee. ExpressVPN sets itself apart from other VPNs with its unique features. And the most important is speed and price.

Before you select any VPN service or app, you should check its speed and price. Most VPN service providers claim to have lightning-fast speed, but they hardly keep their promise. Moreover, the price is equally important. There are VPN providers on the market that make a hole in your pockets with exorbitant subscription plans. Thankfully, ExpressVPN gives you Internet without borders at good price and speed.

What is a VPN? Why you need it?

There is a lot of misunderstanding and misconception around VPN. End users have little knowledge about what VPN apps and services are, and why they need it. Security and privacy are major concerns for business owners worldwide. Quoting a report from Bond Capital, Mary Meeker reported that in the first quarter-year alone, 87% of global traffic was encrypted as compared to 53% in 2016.

VPN (Virtual Private Networks) help consumers keep their online communication safe. By using a VPN, you can browse websites privately and securely as you can hide your location and data. As the instances of data breaches are increasing, it has become mandatory for users to install a VPN app or service on their devices.

ExpressVPN is one of the top five fastest VPN providers in the world. Speed is one of the selling points for any VPN service provider as many users keep asking this question: If their speed will be slowed down by using a VPN.

ExpressVPN, as the name suggests, does not affect your Internet exploration. You can easily open multiple tabs on your browser and perform your tasks smoothly. Ariel Hochstadt, the co-founder of vpnMentor, says before buying a VPN, users should check its locations. If the VPN provider has servers in your country, speed won’t be an issue. ExpressVPN has spread its business in nearly 160 server locations. This global presence pushes your Internet speed to the maximum level.

When the UK government announced that, “It will become the first country in the world to bring in age-verification for online pornography”, people began to subscribe to virtual private network services in large number. This sends a clear message that people care more about their privacy as they would not like to change their content consumption habit.

ExpressVPN removes content restrictions and censorship so that you can explore your music, videos, documents, and social media published from anywhere in the world. This VPN effectively hides your IP address and encrypts your network data. This sends your identity behind a strong virtual curtain, and hence, nobody can trace your digital footprints.

The best feature of ExpressVPN is multi-device compatibility. A single subscription is your key to install this VPN on all your devices including Mac, Windows, iOS, Android, Linux, routers, and others.

Who can use ExpressVPN?

Most often, corporations use a virtual private network to secure their private data. As long as your data is on the computer, it is protected by the firewall, but when you upload the same data on the web, it is VPN that secures the information. Since multi-national corporations are spread across the world, they have to store their data on the web. Hackers use Wi-fi spoofing and Firesheep to hack data. ExpressVPN uses advanced encryption protocols and secure tunneling techniques to mask your online data transfers.

ExpressVPN never logs your traffic data, DNS queries, or anything that could identify you. Your connections are safer and faster as ExpressVPN uses its own private, encrypted DNS on every server. You may explore other amazing features of this VPN service once you subscribe.

Do you use any other VPN service on your devices? Compare ExpressVPN with your existing service and share your experience with us in the comment below.