Is Apple becoming a service-driven company?

For years, Apple has been known worldwide as one of the most successful tech companies, thanks to its iconic products such as iPhone, iPad, and Mac. However, in recent years, there’s been a shift in the company’s business model, indicating more focus on services than devices.

Since 2019, there have been many changes happening within the company. With the App Store, Apple Music, Apple TV+, and Apple Arcade, the tech giant seems to be going all out to mint money from sources other than hardware. As a result, many assume the brand is shifting its focus and becoming a service-driven company.

How is that gonna affect their existing business? Join me as I explore the path Apple is taking and dissect what’s ahead for the mega-brand.

Before looking at the future, we must look at the past. Back in 1976, when Apple was still a new brand, it had a lot of challenges in front of them. These include competition from other corporate giants, their struggle to find the best niche for the brand, and many others. 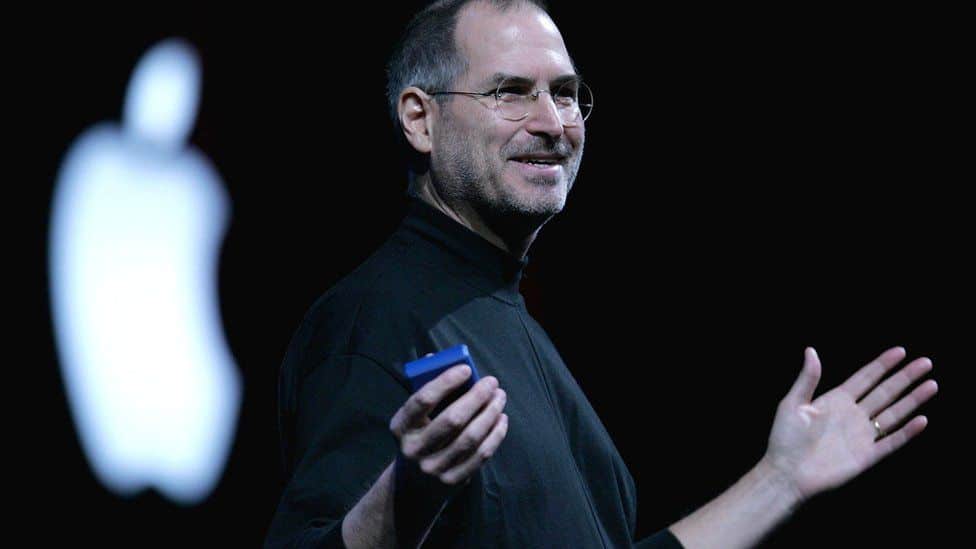 While Steve Jobs had a vision for the company, it still wanted to explore what other possibilities they could ace to make money. Unfortunately, this urge got stronger when Jobs left in 1985, and what followed was a long list of failed Apple products, including the Apple Newton, a digital camera, and even a clothing line!

Things began to change when Jobs returned to Apple. He narrowed the brand’s focus from trying various things and making a loss to do things the brand is already best at.

Not only that, but to stay on the market, Apple made sure to continue innovation, and when it was the right time, the brand introduced iPad and, later, the iPhone. We all know how that paid off! iPhone now accounts for more than 50% of Apple’s entire revenue stream from hardware!

If the hardware business has played a huge role in making Apple a trillion-dollar company, you can’t help but wonder why Apple is repositioning its focus.

If it ain’t broken, why fix it?

If you look at their recent product launches, you’d know Apple is a firm believer in this philosophy. So, why is Apple being forced to change its ways? Well, the reason possibly is the paradigm shift in the whole industry.

According to Counterpoint, global smartphone sales have fallen below 100 million units from last year. While some may argue that it’s because of the recent global pandemic and other incidents, I would like to draw your attention to the fact that this has been the case for a long time. 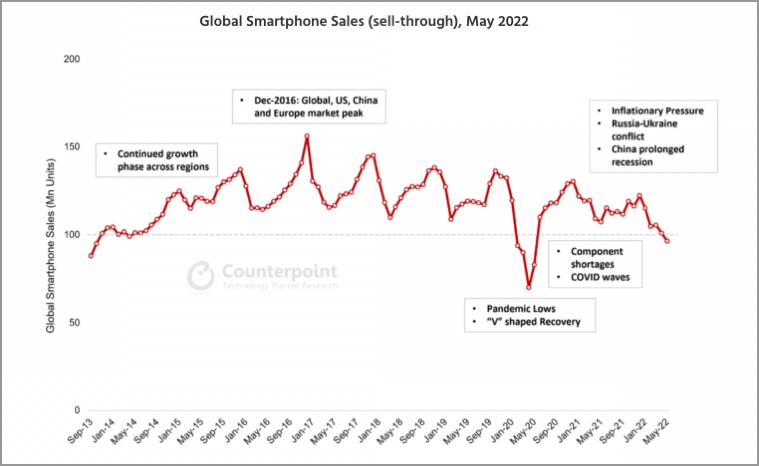 Smartphone sales hit an all-time high back in 2016. Since then, although there have been ups and downs, the ups have not been as big as the lows. Another report from NY Times corroborates the same. There was a time when gadgets used to sell like hotcakes, but now the cakes are still on the shelves.

As you might have guessed, all this news is not something a brand like Apple, whose profit is mostly from hardware, wants to hear. Of course, one may argue this is just a short-term dip, and product sales will be on the rise again once the world economy is restored to normalcy. But to be honest, was there ever a time when the world was normal?

There is no peaceful normal. This is the new normal, the moment we have right now.

Apple realized a couple of things long ago: there has been a shift in consumer behavior, and there’s increased competition in the hardware space. It was only going to reduce their share in the global market.

Besides what’s happening globally, Apple also has to face another challenge: the European Union. We all know Apple recently yielded in the Type-C vs. Lightning port war. If that wasn’t enough, there are rumors of the EU wanting the inclusion of removable batteries on smartphones!

Besides the EU, many nations are developing regulations to control how devices should enter consumer markets. You might have also heard of Apple’s plan to take their iPhone production out of China. That too, as you might have guessed, will cause regulation headaches.

So, by now, you must have understood why it is a good decision for Apple shifting its focus from selling hardware to providing software services.

Apart from the fall in the hardware industry, Apple had noticed the growing importance of services in the tech industry and thus began improving its software offerings.

Apple is not a newbie to the service industry. It has been in business since 2003 with iTunes (kind of an old dog). Since then, the brand has introduced many other services, but most of them were limited to Apple’s ecosystem. It was only in 2021 that we all came to know that Apple started to take its service business seriously with the launch of iCloud+.

With iCloud+, Apple brought most software services provided by the brand under a single roof and made it available at a dirt-cheap price. That was only the beginning. Since then, Apple has been aggressive in providing more services. And that’s the reason for the increase in Apple’s income from services. 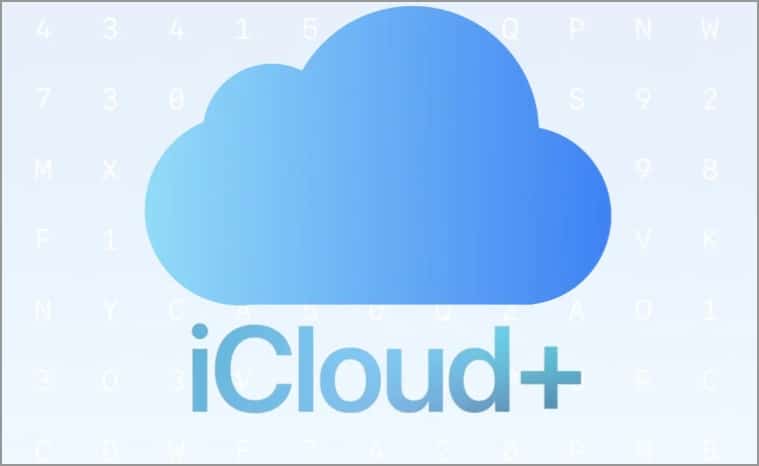 Unlike hardware, Apple doesn’t have to deal with regulations or shifting production since they can easily control the content for each region and design their service accordingly. Even if there is any issue with any software, they can quickly address it by rolling out updates.

A deal with the devil?

While iCloud+ helped Apple get attention from iOS users and buy the service, I won’t call it challenging or successful. It’s easy for the brand to sell things within the ecosystem compared to competing with other brands outside the box.

As Apple continues to shift towards becoming a service-driven company, it has several challenges waiting ahead. One of the biggest challenges will be maintaining the high levels of profitability that it has enjoyed in the past. Services businesses tend to have lower margins than hardware businesses, so it will be important for Apple to find innovative ways to make money.

Apple is not a brand that will feel content with a small margin. Hence, you can expect them to sign partnership deals with fellow competitors in the hardware space to reap profit from the latter’s customers. It’s no surprise that you can already access popular Apple services such as Apple TV+, Apple Music, and Photos on Android and Windows.

With an eye on the future, I don’t think Apple will step on the gas and dive deeply into the subscription businesses. However, in the time to come, we can expect more services for platforms outside Apple’s ecosystem.

I would love to see something similar to Apple One for users outside the ecosystem, which can help the brand get more users and keep up with the competition. Apart from services, if Apple can also bring their hardware under a subscription plan and include them with this all-in-one package, that can give tough competition to other players in the space.

What lies ahead for Apple as a hardware company?

No. Apple won’t leave the hardware space, not in a million years! Although there is tough competition and pressure from the regulations, Apple is here to stay, as does its hardware business.

So we will see the next generations of iPhones, iPads, Macs, and all other devices in the current pipeline. In addition, there are strong rumors that Apple is planning to enter the AR/VR business and the automotive sector, where hardware sales play a key role in generating revenue.

There will be inevitable changes in how Apple handles its hardware businesses, and this was foreseen with the introduction of self-repair service for iPhones and other devices.

Apple was also in the news for helping to develop Qi2 technology, which will directly help its competitors. This move was made likely to keep the menacing EU away from them. How will things unfold? Only time will tell.

Another challenge that Apple will face is the need to adapt to a rapidly changing market. Despite being in the industry for quite a long time, the brand will have to give itself a facelift and re-engineer its processes.

Apple will need to be agile and responsive, driven by a need to constantly innovate and find new ways to deliver value to its customers. As you know, this is completely different from Apple’s current strategy, which introduces new tech only when it is mature enough.

We might also see Apple acquiring new companies or technologies to stay ahead of the competition. Everything said and done, it is pretty evident that Apple is in search of new horizons and is powered by the zeal to become a service-driven company.

Author
Anoop
Anoop loves to find solutions for all your doubts on Tech. When he's not on his quest, you can find him on Twitter talking about what's in his mind.