In the wake of rampant cybercrime, sensational identity theft, and shocking data selling, safeguarding confidential information has become the need of the hour. Even slight leniency towards the prying eyes could make you fall prey to hackers. So, you better stay guarded right from the word go rather than pay a hefty price later.

When uncompromised protection of personal information while surfing the web becomes a top priority, a virtual private network has a major role to play. Aside from shielding your data with a higher degree of protection, VPN also keeps your identity anonymous so that you can browse the web with desired privacy. But, is VPN just about safeguarding your data? Nope!

VPN also comes in super handy when it comes to bypassing censorship and accessing geographically blocked content on the internet from anywhere. So, you can access US Netflix overseas and even stream your countries popular TV shows while you are abroad. Speaking of a virtual private network, UFO VPN is a noted name. The VPN app looks promising in most aspects like efficiency, security, and seamless performance.

But is it good enough to stand out against the best in the business? Having extensively tried out this VPN app, I would like to share my thoughts about it and whether or not it deserves your attention.

Over 2000 Servers in More Than 50 Global Locations

One of the first things that I make sure to check out before picking out any VPN is the number of servers and global availability. And I must say that I have found UFO up to the mark in these two pivotal aspects.

While UFO’s over 2000 servers in more than 50 global locations may sound a lot fewer than ExpressVPN’s 3,000+ VPN servers in 160 locations in 94 countries or CyberGhost’s over 6,000 fast servers in 90+ countries but in most cases, they (UFO’s offerings) would live up to your billing. So, it’s not a deal-breaker for me.

One of the Fastest Connections

Another feature that always dominates my priority list is a fast connection. Before I put my hands on UFO VPN, I was under the impression that ExpressVPN and ProtonVPN offer the fastest connection. However, I was (kind of) surprised to see the level of consistency with which UFO VPN delivers fast connections across several locations.

Throughout my run with the VPN app, the network connection never felt sluggish. Whether it’s movie streaming, extensive browsing or high-octane gaming, it maintained a pretty good standard. So, I consider UFO top-notch as it not only provides fast connections but also keeps the temp intact, unlike many other counterparts that find it very hard to maintain top speed.

No matter how good an app maybe if it lacks an intuitive interface, it can’t deliver a great experience. UFO has looked really impressive to me. The neat and intuitive UI is probably the biggest highlight of this VPN app. Moreover, it works seamlessly across multiple platforms like iOS, Android, macOS, and Windows.

Thanks to the support for five devices simultaneously, it also provides you the desired flexibility to stay guarded on multiple devices. The compatibility with multiple platforms ensures you can move from one device to the other swiftly without putting the protection factor on the backburner.

Putting privacy on the forefront, UFO VPN encrypts your data to shield your network connection so that prying eyes will remain at bay. While connecting to a VPN server, it makes sure your real IP address remains hidden. And with the availability of a kill switch, it also offers you the desired control over your data.

So, whether you wish to circumvent censorship or bypass internet firewalls to watch the hottest Netflix shows that are yet to roll out in your country or catch up with the local shows of your region while holidaying abroad, it has got you fully covered. And that too by keeping your identity anonymous.

While most popular VPN services demand a hefty price tag, UFO has kept the price at a comparatively low point. Though UFO’s monthly price of $11.99 seems a bit expensive, the yearly plan comes at just $47.99, which is comparatively a lot less than what ExpressVPN and CyberGhost demand ($99.99/year). 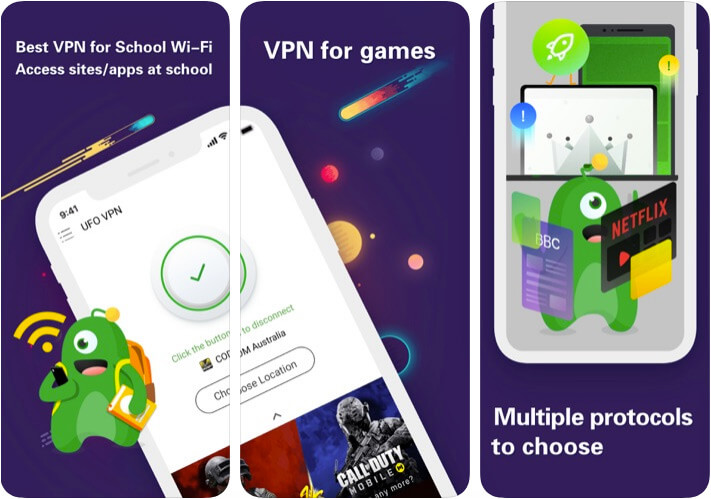 You can avail 5-days premium license for free.

Install the app → Tap on Menu button → Tap on your Account → Tap on Redeem License → Enter the code: xZOdbG

Moreover, it’s also available for free with some limitations like around 10 servers in local places of the USA including LA and NY. If you are not a hardcore VPN user and want an app to offer trusted basic functionality, chances are pretty high that the freemium model will be good enough for you.

Furthermore, the freemium model offers you a great opportunity to try out the app before going for the premium version. In a nutshell, UFO VPN offers a great value for money proposition.

UFO has comfortably checked off most of the boxes to be a pretty good option for the folks who want to have a highly-rated VPN without having to dole out a lot of bucks. Whether it’s fast and stable connections, strong privacy or adorable user-interface, the app looks promising in most aspects. And with a reasonably good freemium version, it is more than capable to live up to basic demand. Long story short, UFO is the best bang for the bucks!

Let me know your thoughts about UFO VPN in the comments down below.