How to Save Mac Screenshots Directly to the Clipboard in macOS

“Universal Clipboard” makes copying and pasting super simple across macOS and iOS. There are many ways this Continuity feature can boost your experience. A classic case in point, you can save the screenshots directly to the clipboard on your Mac so that they are available across your devices.

Let’s say; you have taken a screenshot on your Mac and want to import it in the Notes app on your iPhone. Instead of using AirDrop or other means, take it in the clipboard. Then, your image will be just a quick paste away. Isn’t it a bit more straightforward? Find out how it works!

How to Save Mac Screenshots Directly to the Clipboard in macOS

First off, go to the screen you want to capture.

Next, you need to press the Control (⌃) key on the keyboard. Now, you need to hold Shift (⇧)+Command (⌘)+4 shortcut to send an image of part of the screen to the clipboard.

Simply hold the Control (⌃)+Shift (⇧)+Command (⌘)+3 to take the screenshot of the entire screen.

You have successfully taken the screenshot to the Universal Clipboard. Now, open any app on your Mac or iOS device (connected with the same iCloud account) and then paste it as usual. 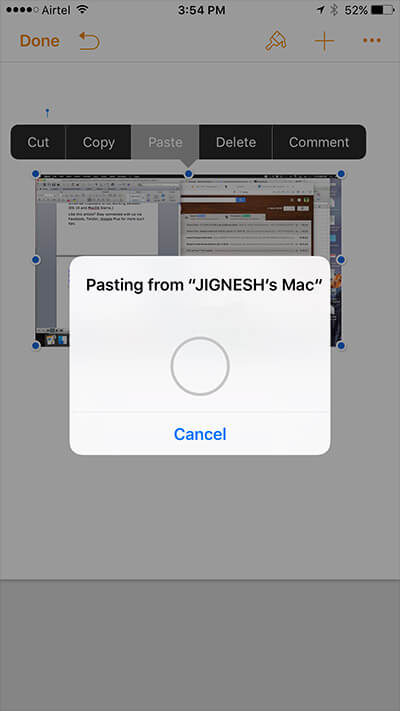 The idea of copying anything on iPhone and pasting it in a document on Mac or vice-versa is really super handy and productive. I’ve always found it neat and therefore would recommend you to take advantage of it to enhance your experience.

You might want to catch up these posts as well:

What’s your thought about this Continuity feature? Share your valuable feedback with us.