How to play Apple Music on Xbox One, Xbox series X/S

Xbox offers several music streaming services, including Spotify, Pandora, etc., to make your gameplay more entertaining as you listen to music simultaneously. Apple Music members can now listen to their favorite songs on Xbox because Apple released its music compatibility for Xbox. Therefore, read on to learn how to play Apple Music on Xbox without AirServer.

Apple Music is now available for download on the Microsoft Store. So, subscribers can access songs on the streaming music service with features like huge album art, full-screen time-synchronized lyrics, and more. Besides, the best part is that music will continue playing in the background when gaming. Apple has released support for the following:

You can listen to 100 million+ songs, download music, or watch videos on your TV. The app has a top navigation bar for Listen Now, Browse, Videos, Radio, Library, and Now Playing. So, it’s similar to the one on tvOS for the Apple TV. Last year, Apple made it accessible through iTunes on the PlayStation 5 and several Samsung and LG smart TVs, Android, Amazon Echo, Google Nest, Windows devices, etc. 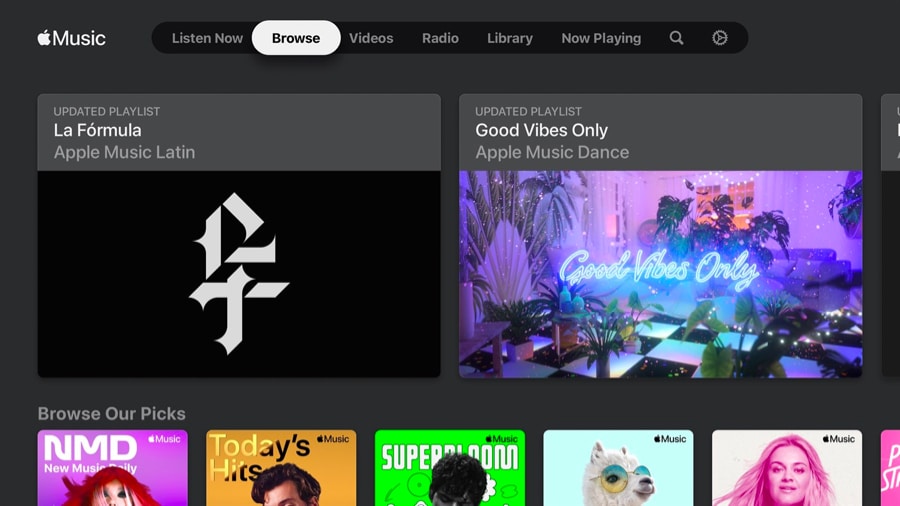 You may now download Apple Music and begin a free one-month trial on Xbox. However, there are several methods to gain longer trials, like purchasing Shazam. But the trial automatically renews at $9.99 after the free trial. According to Apple’s description in the Microsoft Store:

“Users may stream millions of music as you game, completely ad-free. Discover brand-new stations that provide dozens of unique programs produced by well-known musicians, both live and on-demand. Time-synchronized lyrics allow you to sing along with your favorite tunes. Enjoy our music editors’ top selections, including playlists we’ve created just for gaming.”

How to get Apple Music on Xbox consoles

You may download and install Apple Music on Xbox for free from the Microsoft Store by following the steps:

To play music, go back to the main interface on Xbox. Then launch the Apple Music app, enter your credentials, and you’re good to go!

Now, make the most of your gaming experience with Apple Music on Xbox. Do let me know in the comments if you found this guide helpful.

Author
Ava
Ava is an enthusiast technical writer coming from tech background. She loves to explore and research about new Apple products & accessories and help readers decode the tech with ease. Along with studying, her weekend plan includes binge-watching anime.