iPhone vs Android: A Look at Competitive Past and Future

While one rules the entire smartphone industry in terms of market share, the other dominates the earnings chart despite having the comparatively low market presence. The battle between iPhone vs. Android is breathtaking. Ever since the name smartphone began to charm people, these two have been ruling the roost.

There have been numerous history-defining moments in the last decade or so. With both iPhone and Android in no mood to let the other run away with success, the competition continues to become interesting with each passing day. The rivalry being so intense, it’s tough to announce the winner. However, I’m going to have a look at the past and try to find the one that stood out. And, look into the future to predict where this rivalry goes ahead and which will have the upper hand in the next decade.

iPhone vs Android: The Ever-Enticing Rivalry

iPhone Sales in the Last Decade

Apple could sell just 3.7m iPhones in 2007, the same year when Steve Jobs launched the iconic smartphone. However, it was able to sell massive 231.5m units in 2015, which is the best till date. Since 2009, the Cupertino-based company has been the top five smartphone vendors in the world. Since 2012, Apple has retained the spot of the second most popular smartphone vendor in the world.

“Apple has been amongst the top 5 smartphone vendors in the world since 2009. With the decline of Nokia and RIM, market leaders at one point, both Apple and Samsung grew their presence in the market. Samsung took the lead and has held a share of 20 to 30 percent since 2012. The Korean electronics company shipped more than 320 million smartphones worldwide in 2015. Apple has consistently been Samsung’s closest competitor, maintaining the position of second most popular smartphone vendor in the world since 2012. Apple’s market share has varied between 14 to 21 percent over the years. Apple’s iPhone sales have consistently increased over the last few years, going from almost 170 million units in 2014 to more than 230 million iPhones sold in 2015 alone.” – Statista

Android Numbers in the Last Decade

Led by Samsung, which has been leading the market with over 20% share worldwide, Android has seen its number rise from strength to strength.

“More than 1.8 billion smartphones are expected to be shipped worldwide by 2019, a projected growth of more than 400 million units in comparison to the 2015 figure. Samsung leads the industry in terms of shipments. The company’s figures have been increasing at a fast pace in the recent years, allowing Samsung to be distant itself from its competitors. The South Korean company went from shipping 2.4 million smartphones worldwide in the first quarter of 2010 to over 85 million units in the last quarter of 2015 alone. In 2015, Apple shipped, on average, nearly 58 million units per quarter.”

“Much of the Samsung’s success in the smartphone industry can be attributed to the introduction of the Galaxy smartphone line in 2009. Thanks to this product line, the company has taken the lead in global sales figures for smartphones in 2011. Galaxy S, Samsung Galaxy S5 Mini, Galaxy Note 5 and Galaxy S6 are a few the Galaxy models produced by Samsung.” – Statista

Which Won the Battle When It Comes to Earning More Money? No Guessing Here…

If the latest numbers are anything to go by, Apple takes away around 90% of all profits in the smartphone business; leaving merely 10% for the rivals to fight over. That’s incredible, isn’t it? 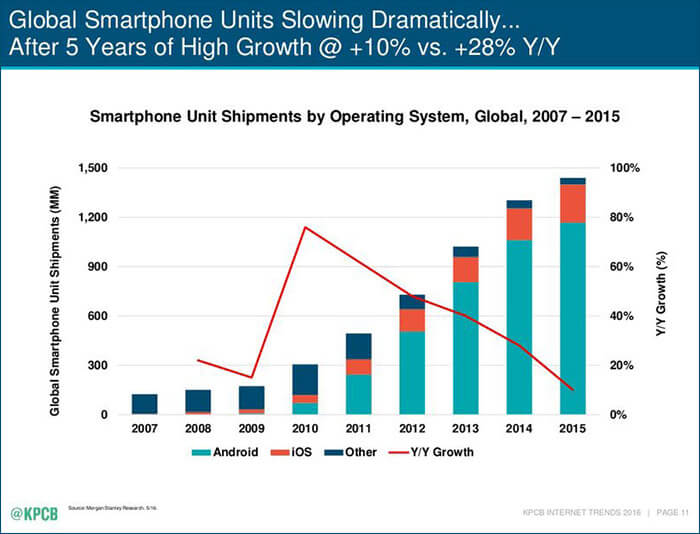 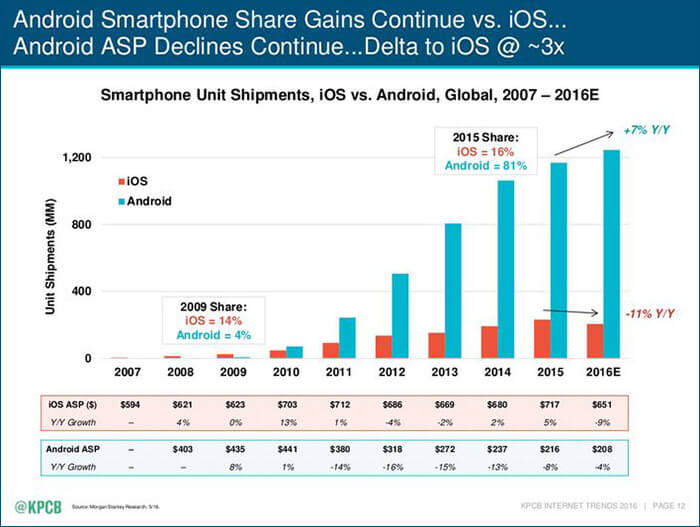 “Zooming out to a longer historical view shows Apple’s iPhone strategy has remained broadly unchanged from the start. The Cupertino company has been remarkably consistent in maintaining a smartphone price somewhere near $700 and enticing more users with annual feature additions and improvements. Android phone prices, on the other hand, aren’t controlled by a unitary body and therefore exhibit all the signs of the brutal price war we’re all familiar with. Device prices have fallen every year since 2011, and the average Android phone now costs roughly a third of the average iPhone.” – The Verge

So, Which of the Two Won the Battle?

To be honest, it’s extremely tough to rule out Android as it enjoys overwhelming success. If even a vegetable vendor is able to own a smartphone today, huge credit should go to Android. Indeed, it has played a massive role in taking the smartphone to almost every home. To say the least, it’s an unbelievable achievement. Whereas iPhone has amassed money thanks largely to what it brings to the table—the superlative performance, unmatched OS, and excellent user-experience.

If you look at success from the view of profits, it’s Apple that has won the battle decisively. But, if you look at the accomplishment of Android and how significantly it has benefited the common man, you would have to go with it.

For all said and done, Apple has to be given the title of the winner as it earned far more than its rival.

Which Will Rule 2017 and the Upcoming Decade?

Even with just 13% market share, if you can earn around 90% profits of the total smartphone business, you are way ahead of the competition. I would say there is no competition at all between Android and iPhone. While there are too many players on the other side of the spectrum, it’s none but iPhone that rules iOS ecosystem; which is widely believed to be premium and more advanced as well as secure than its rival.

As against many people predicting that the mighty iPhone would no longer have its existence in future and the age of Apple is gone, I would say iPhone would continue to be the most profitable smartphone in the world (if the not the product) and hence continue to be a money-spinning product for the Cupertino-based company. Yes, its sales numbers may dwindle from time to time, but it’s too massive a bull to miss the top spot—at least in the near future. After all, it possesses an unmatched combo pack of software and hardware; which may not entertain fans and critics all the time but it’s got enough to be the best in the business. And, that’s what allows it to seal the deal—eventually!