How to Change Dictation Language on Apple Watch

Apple Watch lets you chat with your friends and family in your native language using the speak-to-text feature. Better known as Language Dictation, the feature supports multiple languages, mirroring those added on your iPhone keyboard. You can replace the default dictation speech with your preferred one and enjoy having lots of fun-packed conversations in your mother tongue. If you’re interested, let me show you how to change the dictation language.

How to Change the Apple Watch Dictation Language

Speak a dialogue, or pronounce the whole message in your selected language to check if the dictation works correctly. 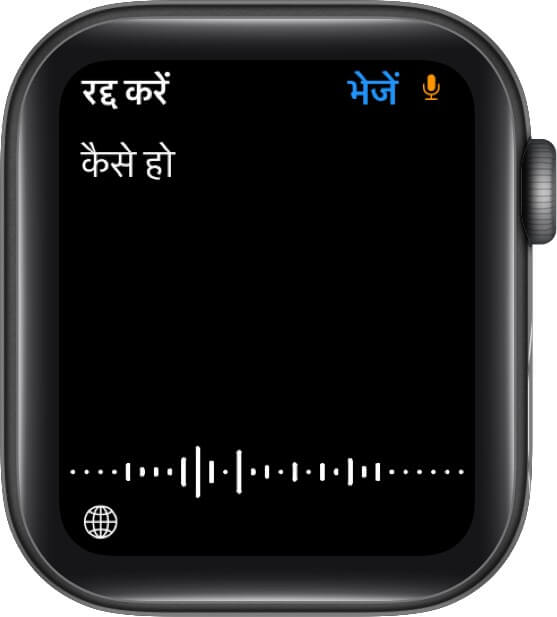 Is your language not displayed under the list of dictation languages? Don’t worry; we have found a way to add it. Get your iPhone and follow the steps mentioned below. Make sure your watch will display the languages, which are officially supported for speak-to-text dictation.

The keyboard is added and you can select it as your dictation language on your watch.

What Is It Like to Change the Dictation Language?

Switching to your native tongue doesn’t change the language of the entire watch content. It will remain the default. But, you’ll have to change the default dictation language every time while composing a new message.

This feature works with all built-in social as well as third-party writing apps on your watch. You can use this feature to write emails, reply to messages, and chat on social networking sites.

If it isn’t working or the microphone icon doesn’t appear, you might need to consider the points mentioned below.

The ability to dictate various speak-to-text languages makes Apple Watch versatile and stand out from its competitors. This is indeed a handy feature to keep up a conversation between two native speakers. So which language you chose for the speak-to-text feature on your Apple Watch? Let us know in the comment section below! If the dictation isn’t working on your iPhone, read this step-by-step guide to troubleshoot the error.

You may also want to read these posts!

Author
Sagar
I am an aspiring tech blogger who is always in love with new generation iPhones and iPads. At iGeeksBlog, I am dedicated to rendering the How-To's, Troubleshooting bugs, and reviewing apps that are a great deal of help. When I am not writing, I am daydreaming about the future of all things Apple and watching videos of smartphone battles on YouTube.