The Apple iPhone series has proven again that it is the most valuable of smartphones. Despite smartphone prices scaling new highs, people can definitely invest their money in iPhone device with the confidence compared to close rival Samsung’s models, as it retains resale value at an incredibly higher rate.

In a recent report by cell phone trade-in website, BankMyCell, it was confirmed the long-held belief that there is a significant resale price retention difference between the Apple iPhone and competing premium Androids such as Samsung, LG, Huawei, and others.

Of course, for most smartphone reviewers, trade-in value is not something that is discussed when considering the price of an “iPhone. However, when you think that the latest iPhone XS comes with a starting price of $999, it is worth bearing in mind its resale value for tradeoff when considering an upgrade or a new model.

Now, the good news according to cell phone buyback website BankMyCell is that the value of an iPhone X declined by only 30 percent in nine months of ownership. This is a big plus because it means that a buyer could expect to resell this phone for $690, and then use that money towards acquiring an iPhone XS or the new iPhone 11 coming this September.

By comparison, during the same period, the Samsung Galaxy S9’s value crashed by some 60 percent, double that of the iPhone X – Meaning, while the S9 had a similar retail price, it could sell for just $290. Another interesting fact they pointed out, is the Samsung Galaxy S9 lost as much as 41.66% in the first month compared to the 30.93% the iPhone X lost in a whole nine months.

iPhone XR, XS, and XS Max have all been retaining a great proportion of the original retail value this year, as well. It was noticeably mentioned that the most significant drop in value comes from three months following every new iPhone launch. Therefore, a buyer who wants to own the very latest in technology can remain on top of the curve by trading old device in just as a new device gets shipped.

Below we can see how the price drops look after a whole year, including the huge depreciation in iPhone value following a new release. 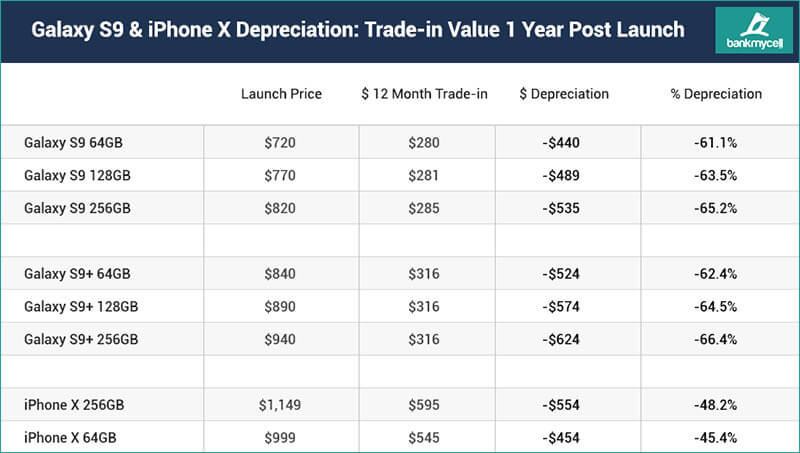 Avoid big price drops by getting the resale timing right

As mentioned before, timing is everything when it comes to reselling iPhone’s as they crash in value after the new models are released. In effect, the best option is trying to sell previous model phones just before Apple announces the next generation of the iPhone; which usually happens in late September. 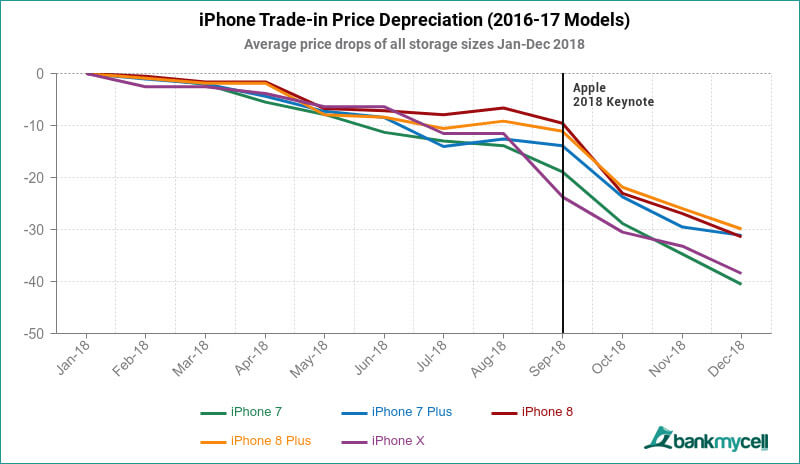 In addition, the study found that customers taking advantage of any 30-day price lock offered by trade-in stores’ could earn them $100+ more. As there is no commitment to send in the iPhone, people can freeze their value while they wait for the new iPhone to arrive.

Ironically, after a three-month steep dip in the resale value of iPhones after new models are released, the price will recover. Stores know that everyone will go nuts to get the new iPhone, so they set trade-in prices lower to maximize profits. Since the iPhone upgrades are typically announced in September, by January the price of the previous generation iPhone will recover somewhat. When it comes to the iPhone X, this proved right. In January 2019, the resale price of the iPhone X jumped back up nearly matching the value before the crash.

By comparison, the same does not seem to happen among Android phones. Looking at the Samsung Galaxy S6 to S8 devices, there were only modest drops in prices following the release of the S9. Since the cost of the Samsung Galaxy S series already declines rapidly, it is not surprising that there isn’t much more room for the value of the product to decline.

The fact that the iPhone is so good at retaining its value supports Apple in the premium price tier of their devices. Consumers can use their old iPhones as collateral against their new purchase and reduce the cost greatly.

Apple even introduced its “Give Back” trade-in program to help encourage buyers to spring for its best models; this helps preserve the value of their existing purchases. Many consumers accuse Apple of using the trade-in program to capture even more value from the second-hand market by setting low trade-in prices on their own site and offsetting that from new phone purchases.

People remain wary of Apple’s attempts to manipulate the anticipated lifespan of the iPhone. Facts speak for themselves, though, even if Apple is setting low values for second-hand iPhone trade-ins, the brand still seems to retain value for longer than its rivals.

While Android in general and Samsung, in particular, try to provide near-equivalent services, the difference here is that Samsung will buy back your old device for a really competitive value. Many see this as a smart way to stop brand churn and keep their loyal fans coming back for more.

Apple seems to have succeeded in positioning itself as the luxury car of the cell phone industry, which can retain its value even after it is already purchased. By comparison Android models, even the vaunted Samsung Galaxy series, seems to be more akin to reliable, but basic models that don’t hold value over time.