The biggest challenger of the iPhone 8 has just arrived. Lashed wish gorgeous display and powerful specs, Samsung Galaxy Note 8 is designed to be an absolute beast! Since the most awaited smartphone of 2017 iPhone 8, is just about to launch next month, the mouth-watering showdown between the two most powerful smartphones is well and truly on the cards. So, which one will be crowned as the best in the business?

Last year, when Samsung launched Galaxy Note 7, many thought the phablet would take away the sheen from iPhone 7. And just when the prediction seemed to be getting true, the unfortunate battery explosion happened out of nowhere. The discontinuation of Note 7 played a decisive role in giving the iPhone the much-needed breather, which badly needed some assistance to put behind the miserable phase. 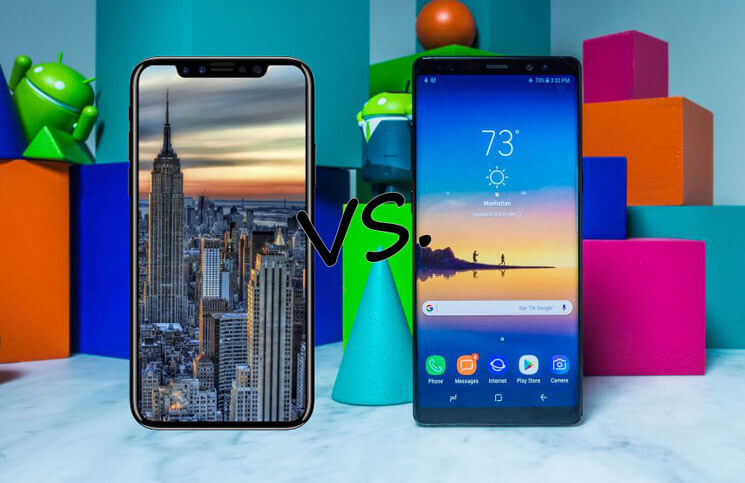 If we take a look at history, the iPhone has always grabbed the title of the most popular smartphone of the year—as far as numbers are concerned.

Just a few days back, market research firm Strategy Analytics reported that iPhone 7 was the most popular smartphone in the second quarter of this year (March-June).

In What Could be Termed as a Lopsided Battle, A Year-Old iPhone 7 Thoroughly Dominated the Newest Models of Its Biggest Rival.

Strategy Analytics reported that Galaxy S8 and Galaxy S8+ shipments stood at 10.2 million and 9 million, respectively, in the same quarter. They were ranked the world’s third and fourth most popular smartphones during the period.

Knowing iPhone 7 is almost a year old, it’s amazing to see how successfully it dominated the opponents. While iPhone 7 shipments were reported to be at 16.9 million, iPhone 7 Plus’ stood at 15.1 million.

Despite being rated so highly by reviewers and fans, S8 just could come anywhere near Apple’s smartphones. It just goes on to show the enormous popularity of the iPhone. It also proves that even Note 7 couldn’t have stopped the iOS device from taking center stage.

Note 8, At Its Very Best, Will Play Second Fiddle

Without undermining the superior specs that Note 8 flaunts, I don’t see it as a big threat to Apple’s magnum opus. Enriched by a host of eye-catching features, including the Crown Jewel—Face ID with 3D Sensors, the upcoming iPhone has got everything to remain head and shoulders above the rivals.

I believe the overall sales of the iPhone 8 in the first quarter (Sept to Dec) will be around 100 million. It would finally beat the record of iPhone 6/6 Plus’ 75 million unit sales in 2014. And I say it purely based on the enormous anticipation.

“In reality, we can see people buying this phone for the larger display and improved S Pen – and despite the higher price, that could attract a large audience indeed.

As long as the Note 8 doesn’t run into any similar issues to last year, we’re going to be treated to an epic battle between Samsung and Apple this year to see which brand can offer the most impressive handset.” – Techradar.com

“The Galaxy Note 8 has to wash away the bad taste of last year’s battery-burning Note 7 double-recall. It has to outshoot every other phone with a set of dual cameras that’s already out there. And finally, Samsung’s highest-end phone needs to outshine the LG V30, Google Pixel 2 and iPhone 8, while also convincing buyers to choose it over the cheaper Galaxy S8 ($649.88) and Galaxy S8 Plus ($729.95 on Amazon)” – CNet.com.

Agreed, there is a Cut-Throat Competition. But iPhone 8 is Too Charismatic Not to take the Pole Position.

Yes, it will be a tough race for the pole position as the rivals seem to be more prepared now than ever before. But remember it‘s the 10th anniversary of Apple‘s magnum opus. And if you can‘t hear the name of the lightning called iPhone 8, I guess you are either underestimating the massive euphoria or perhaps don‘t want Mr. Champ to decimate the opponent’s 10th time in a row completely!

“While the device itself seems more evolutionary than revolutionary, we believe this launch represents the return of staunch competition into the premium segment ($700+ ASP) of the smartphone market following Samsung’s Note 7 debacle last year. For Apple, we are concerned that the company needs to meet momentous investor expectations following the expected launch of three new iPhone devices in September.

This could be made more challenging when considering that only 18% of potential iPhone buyers are willing to spend $1,000+ for a new device (Wireless Subscriber Survey; 08/09/17), which is below the 30-35% figure investors seem to be expecting.” – Barclays’ Mark Moskowitz