How To Force Refresh App Store On iPhone And iPad

App Store on iPhone or iPad is one destination where developers and end-users interact; for app developers, it’s a marketplace where they can showcase their cool apps; in a way, they put their knowledge and intelligence on display. In turn, users appreciate or sometimes censure for their glitches.

Every day, Apple approves, disproves and deletes thousands of apps on its App Store. Apart from this shuffling of apps, Apple also makes necessary changes in the layout & buttons; such changes take place behind the curtains, and therefore, we cannot see them apparently. Moreover, these are subtle changes for which Apple doesn’t wait for new iOS release. During these happenings, App Store may fall into a little mess, leaving users confused.

But there is not much to worry about; you can Force Refresh the App Store on your iOS device. Thanks to Twitter user zachary drayer, who suggested a following solution.

How to Force Refresh the App Store on iPhone or iPad

By default, you will be landed on Featured apps screen. You can see other icons like Top Charts, Explore, Search, and Updates. Now the fun begins.

Step #2. All you need to do is keep tapping on any of these icons constantly. 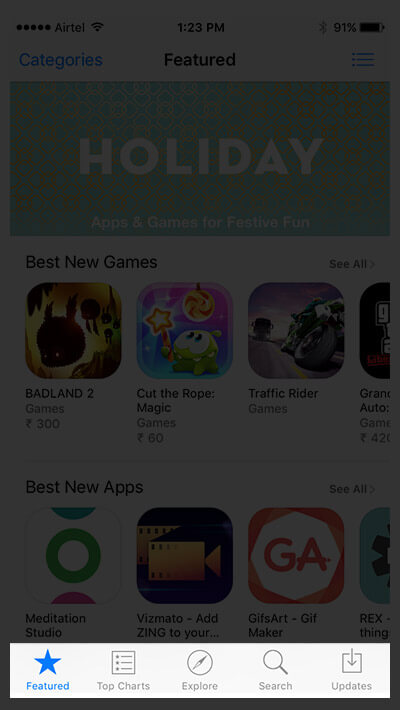 Within 10 taps, you can see that the App Store begins to refresh itself. This looks quite crazy as a solution but it actually works. As an experienced user of iPhone or iPad, you must have shut down the App Store from App Switcher.

Try to do this trick on your iOS device and check the results. Share your feedback with us in comment.