How to Block Someone in Gmail on iPhone, Android, and Computer

Google is an ocean of productivity tools, and the one which has become an integral part of everyone’s life is Gmail. I am sure that Gmail is used by billions of users worldwide ever since its launch in 2004. Gmail is the most used email platform by people all around the world besides Yahoo Mail and Outlook.

That being said, Gmail has still some of the finest features as compared to all its competitors, but I still feel there can be a scope of improvement in spam email feature. Even when you hit spam to a particular email, sometimes, it may still creep into your inbox.

That’s when you try to block a particular sender to no longer receive emails from that person. And this is where I can guide you on how to block someone in Gmail on your iPhone, Android devices, and computer or laptop too. Here you go!

How to Block or Unblock Someone in Gmail on iPhone, Android, and Computer

When someone sends you a message, and he/she is blocked from your end, the emails would go into the spam folder. Don’t worry; the opposite person wouldn’t know that you have blocked him/her. I have split this guide into three sections as given below so that the respective users can refer only the guide that they want to.

How to Block Someone in Gmail on iPhone, iPad, and Android


To block someone on iOS or Android device in your Gmail app is quite simple. Follow the below-given steps to get started!

Step #1. Launch the Gmail app on your Smartphone. 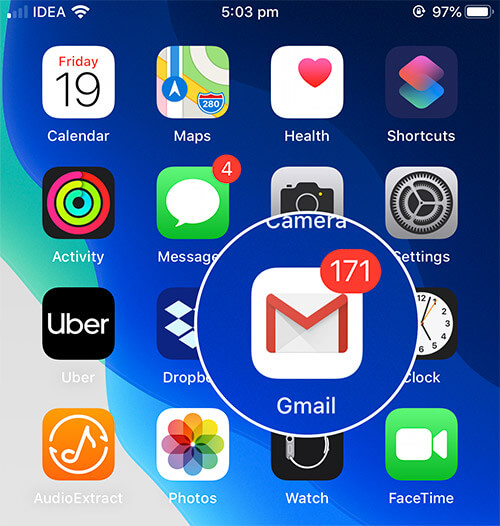 Step #2. Open the email (message) of the person that you want to block in Gmail. 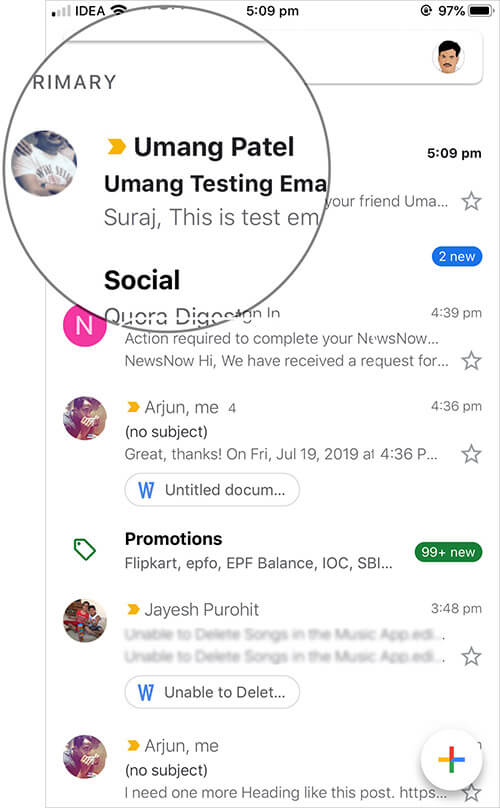 Step #3. Now, tap on More option which is shown as (…) three dots on the right top corner. 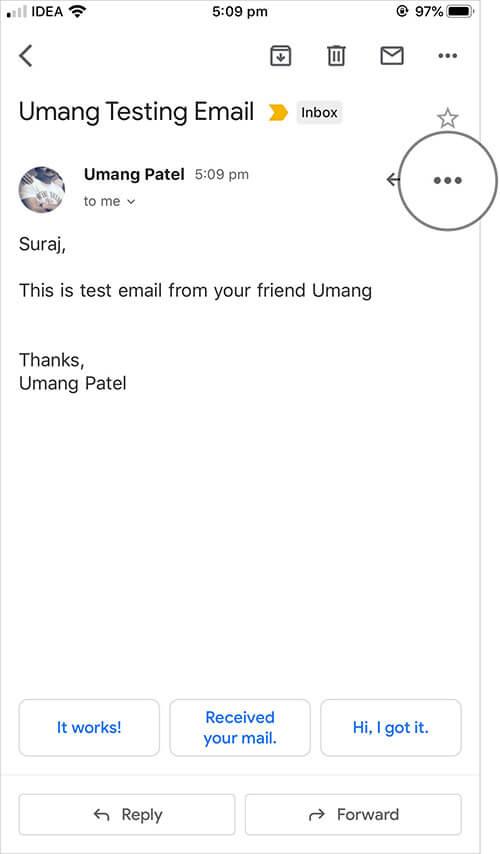 You can unblock that particular person in the same way by following the above steps and selected Unblock option. 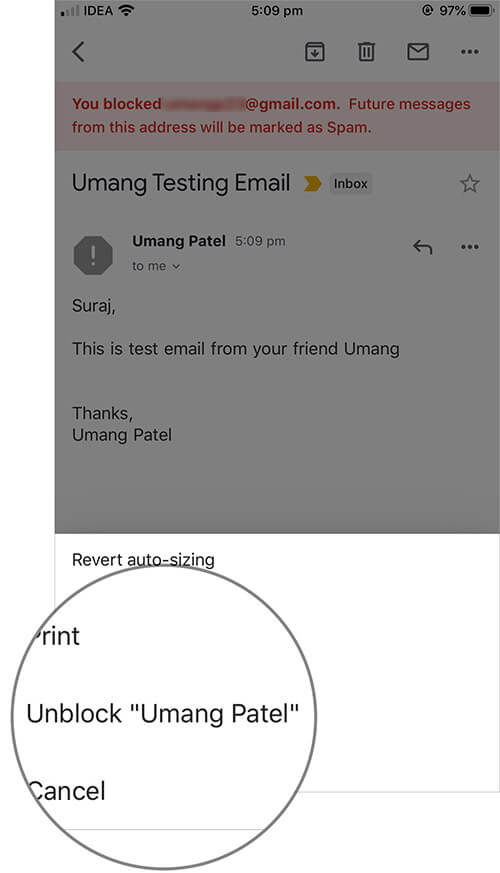 So that’s how simple it is to block/unblock someone in Gmail through the app.

Now let’s see how you can block a sender in Gmail on your computer or laptop.

How to Block Someone in Gmail on Computer

Simply follow the below-given steps to block anyone from your Gmail account by using a computer or laptop.

Step #1. Open Gmail by using mail.google.com in the URL address bar of your browser.

Step #2. If you haven’t logged on into your Gmail account, login now and open the email of the sender that you want to block.

Step #3. Next, click on the three dots on the right corner far beside the sender’s name and tap on Block option. 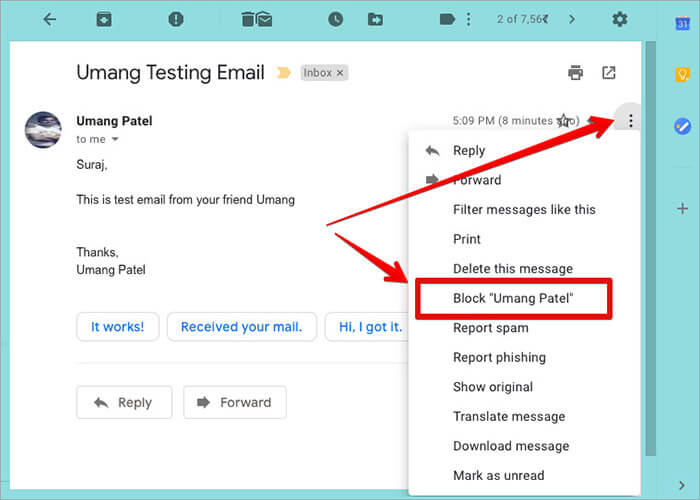 Step #4. Now, click on Block again to confirm that you want to block this user and don’t want to receive any messages in your inbox. Instead, they would directly go into the spam folder. 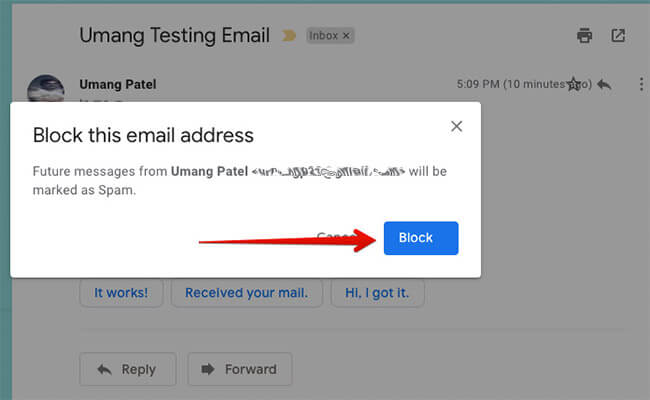 You can also unblock that particular person’s email in the same way by following the above steps and click Unblock option. 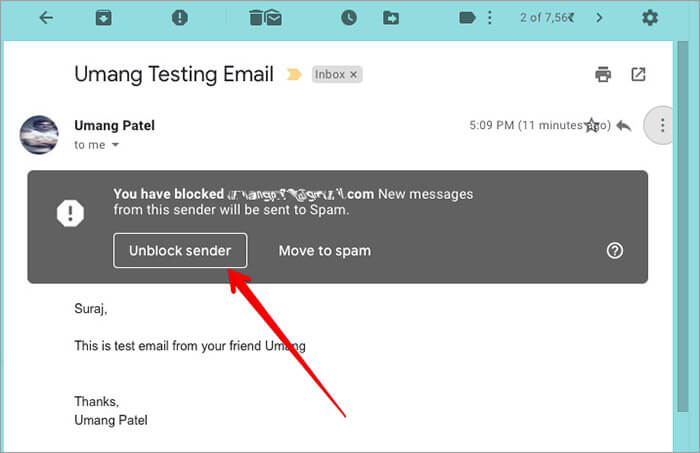 That’s it for today! I hope you understand this guide to that you can block emails in Gmail with ease!

Sometimes when you mark an email as spam, it still creeps into your inbox somehow, and this is where Google must improve this feature. This will give a better user experience because no longer spam emails would come into your inbox if this is implemented properly.

What changes do you want Google to make in Gmail? Comment below and I will try to address your issues to the concerned officials for sure!

Want to explore even more guides on using Gmail effectively?