Access and Use Different Emoji Skin Tones on Mac and iPhone

The same skin tone for an emoticon will never fit right in all situations. Apple offers various skin tones for different emoji characters in iOS and OS X. Given that, you might want to know how to access and use the diverse emoji skin tone variations.

The character set are available in Mac from OS X 10.10.3 onward, and from iOS 8.3 onward in iPhone and iPad. So, here we have the steps you’ll be required to go after in order to access and use different emoji skin tones on Mac and your iOS device.

How to Access and Use Different Emoji Skin Tones on Mac

On Mac, OS X makes it very simple and straight forward to access different emoji skin tones; however, keep in mind that not all emoji have adjustable skin tones. Apple keeps making things better, so nothing to worry here. The steps go in the rundown below.

Step #1. Get to the standard OS X emoji character skin (Use keyboard combination of Command and Control keys followed by the space bar.)

Step #2. Click on the emoji of your choice and hold for a moment to make the emoji skin tone options appear. 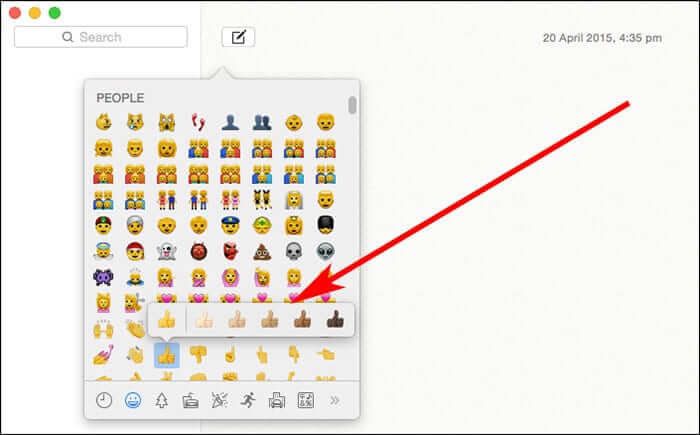 Users with Force Touch trackpads can use a secondary harder tap for the same. That’s it, select the emoji skin shade you want to use and it’ll be set as default for that particular emoji character.

The family and group people emoji currently have only a deep yellow shade, but we can expect more on this in near future. I personally think that a color picker should be offered, but these six skin tones would do as well.


Users who want the same functionality on their iOS device can go for this. The trick is basically the same, but before you can access these new color shades of emoji characters, you need to make sure the emoji keyboard is enabled in your iOS device. If already done, you’re good to go.

Step #1. Get to any text input area and tap on the emoji keyboard icon.

Step #2. Just like you did on your Mac, tap and hold an emoji icon to access the multiple diverse skin tone variations of that particular emoji icon. 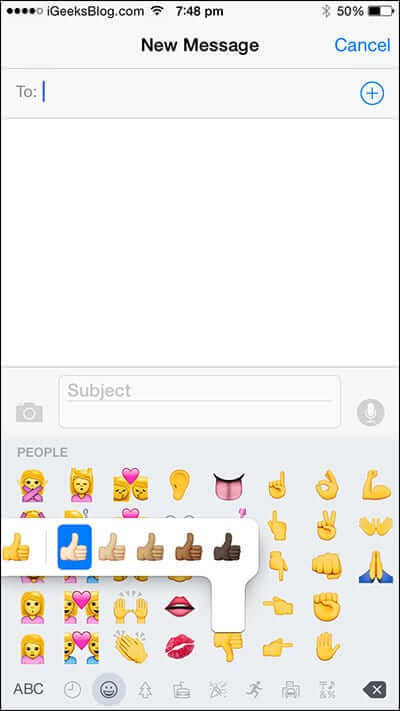 Step #3. Select the new color and this will insert the emoji into the keyboard.

Step #4. The new color will now be the default for that emoji character icon.

If you don’t want your friend to see a strange-looking alien icon instead of the emoji you sent, make sure he/she is using the most recent version of iOS or OS X. Changing from the yellow color to a real skin color is weird and awkward; an option to change all emoji to any new color would just be a good idea. I hope Apple gets this soon.

Read More: How to Use Emojis on Mac?