#AppyWeek with AK: Can four singles meet someone special on Bumble?

Welcome to another edition of Appy Week with AK. Since we stepped into the official month of love, aka February, I had to test some dating or relationship-centric apps. Bumble popped up quite a few times in my research, and I felt that it should be reviewed for my readers.

However, I am happily married! And fake-dating did not bode well with my conscious. So, who tested Bumble for a full week? Well, you can always find willing & single guinea pigs, and I was lucky enough to find four.

Bumble: From the eyes of four ready-to-mingle singles

To understand the length and breadth of the Bumble app, I invited, pushed, pleaded, and blackmailed (with puppy eyes) four fellow tech geeks who happen to be single.

Mehak: A sassy thirty-something hopeless romantic who has also been literally hopeless at finding romance. She’s almost given up on dating apps altogether but agreed to fumble around with Bumble for this article.

Harshanki: Workaholic, narcissist, and a marketing nerd with a penchant for coffee and books. Find her backpacking during weekends and trading during the weekdays. She does not understand love but keeps looking for a bond that helps them grow together. Tune in to her podcast to know more about her.

Nidhi: A self-professed bibliophile crazily in love with the idea of love. She is a believer in serendipity, and hence, readily agreed to test Bumble and right-swipe at least a dozen guys. But she is also impatient, so she stopped after 3! Was 3rd time a charm for her? Scroll to check!

And before I share their experience, let me give these four amazing people a huge shoutout for participating and picking up the idea with so much honesty and dedication.

Thank you for risking your singlehood for me! 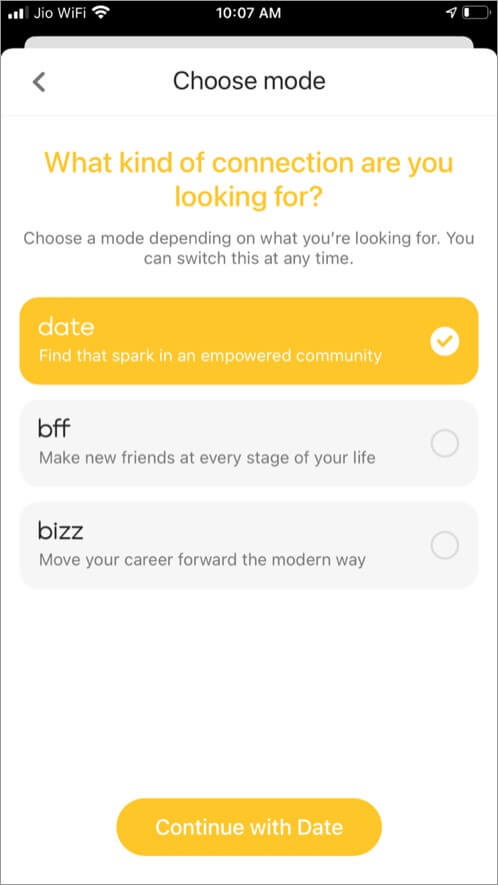 Between these four, almost all dating app has been explored at least once, from Tinder, Happn, TrulyMadly, Aisle, and more. As far as the interface goes, they all had different views.

Not so mellow yellow

Mehak was glad to be relieved from the stereotypical reds, pinks and enjoyed the happy-go-lucky yellow theme. Whereas, Harshanki found it too loud and would have preferred a minimal black/white and hued interface.

Naturally, we have to pin this to personal preference. But what’s interesting is that all four found the app easy-to-use, sharp, to-the-point, and well-built. As Yash says,

It neither looks cheap nor (thankfully) over the top cheesy or cliche.

Talking about cliche, the Bumble app does fall in the pit of swiping right and left. After all, the CEO & founder of Bumble, Whitney Wolfe Herd, was the vice president of marketing for Tinder at one point. 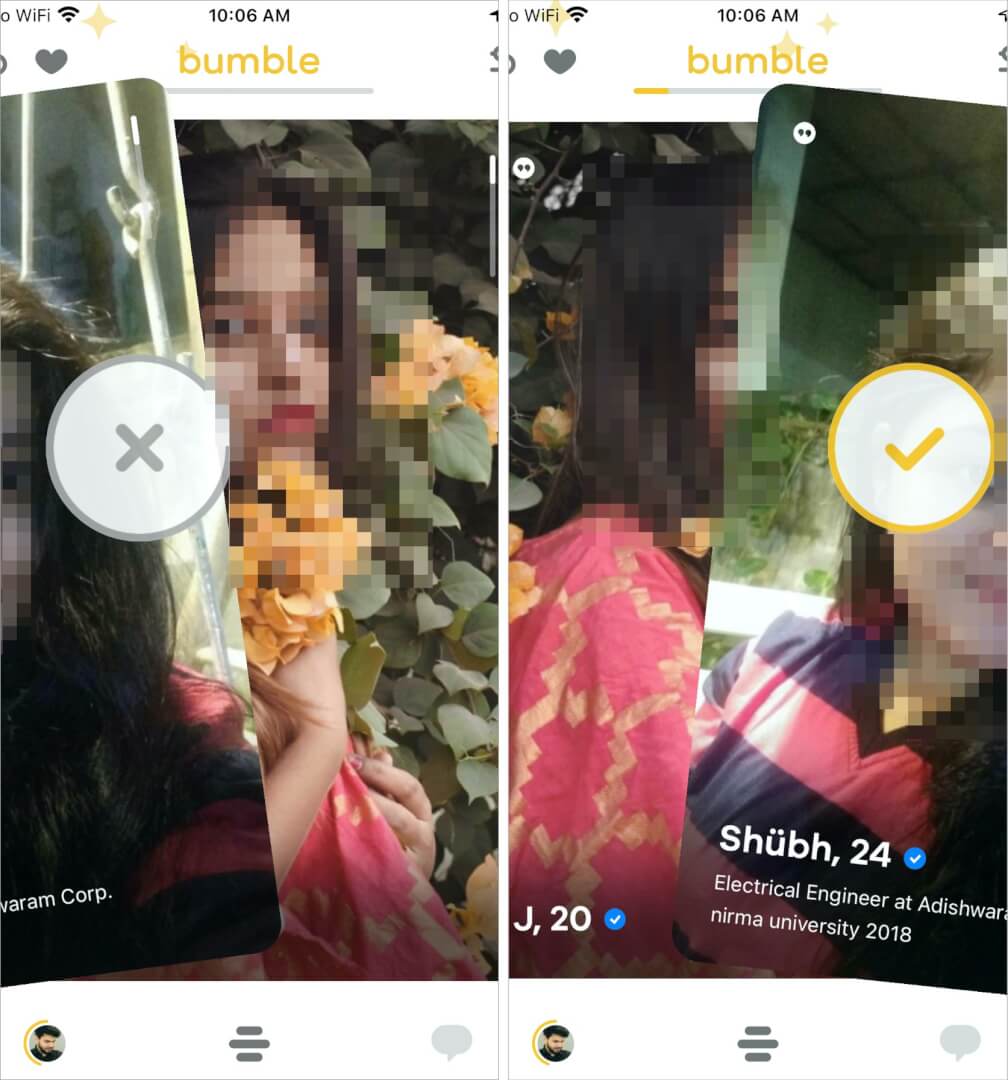 What Bumble adds is a Swipe Up feature to see the complete profile. However, Nidhi finds it a bit confusing and prefers Tinder’s version of tapping the picture.

They are witty, compelling, and ensure that your day doesn’t pass by without opening the app; kudos to Bumble’s marketing team! 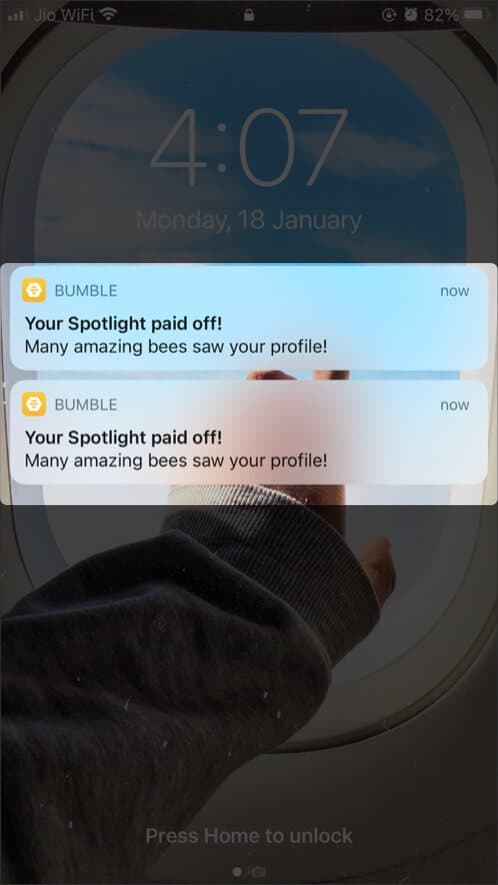 All it takes is the right profile

The group agreed in unison that Bumble offers better profiles. There’s enough space to write about yourself and what you’re looking for. 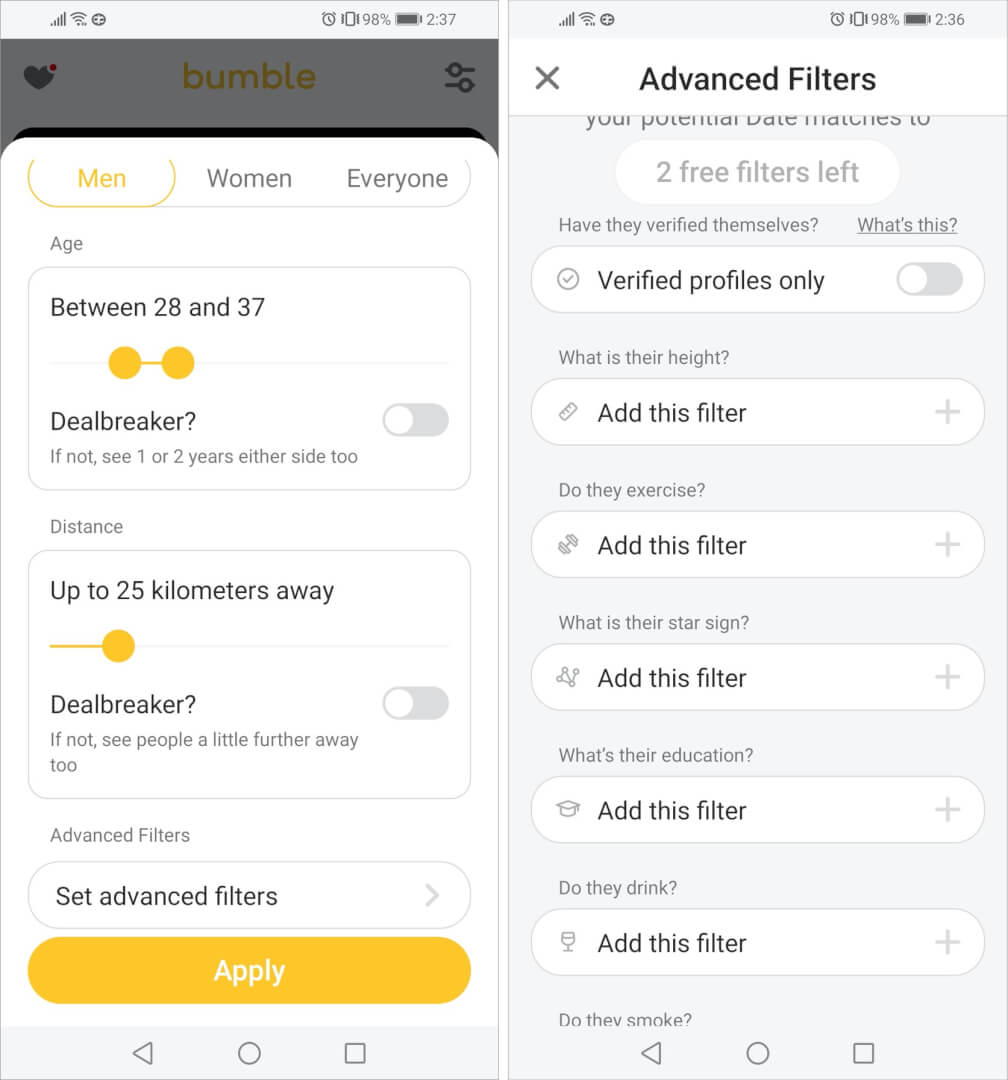 On the plus side, you get up to three free filters (initially), wherein you can add specific preferences like star sign, education, drinking and smoking preference, exercise, and more.

Is Bumble partial towards women?

Well, Bumble claims to have changed the game rules. It has given some exclusive power of making the first move to women. I wanted my team to notice if there is any difference due to this.

Interestingly after you swipe right, the app gives you 24 hours to make the first move. Thus, pushing you to stop overthinking and proactively approach a situation.

This gamified experience also implies to the other side. They have to respond in 24 hours, or else the connection expires.

All the women agreed that this feature significantly reduced the amount of creepy, unsolicited messages. While Bumble’s algorithm resolves that problem, Mehak finds an interesting problem here.

While it saves us from a barrage of unwanted messages, sometimes it’s too much pressure. Moreover, when chatting with someone, the ‘Your Move’ feature makes it mandatory for each person to respond in turn.

This does not always work, as sometimes a match might respond with just a word or two. At times this feels more like an interview than a conversation, and that gets exhausting.

But then, this is the case with any and every conversation; it does take two to tango, right! Thankfully, the app does have something to resolve the issue. 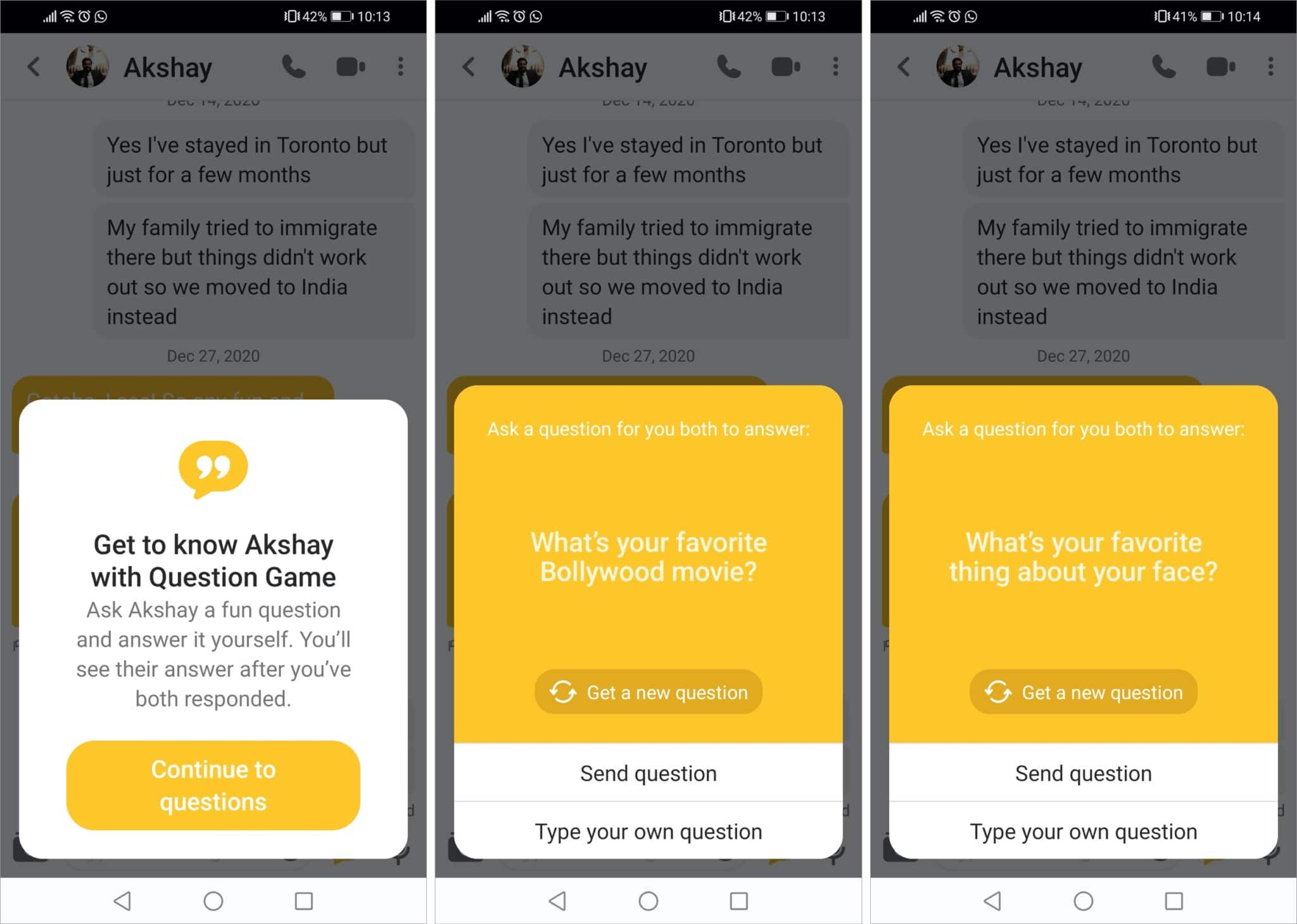 This neat and, I must say, quite a helpful feature that enables both parties to interact without awkward pauses and help build a better understanding.

Interestingly, the questions vary from as mundane as ‘what’s your favorite movie’ to as saucy as ‘what’s a really sexy name for someone.’ Thank the Lord; you can skip questions that you don’t find right.

Does the Bumble Bee sting?

A constant question, I have been asking these guys for the past week. Did the love bug sting? Well, they did find some decent match, and it might be too early, but I am keeping my fingers crossed.

While my soldiers are proudly sporting the virtual dating badge, they had some excellent observations. Both Mehak & Nidhi felt that the matches’ quality was much better than other dating apps they’ve tried.

They were also more well-educated, well-spoken, and well-traveled. Most of the guys also seemed quite honest and open about what they are looking for.

Although, Harshanki wasn’t that impressed.

Hinge’s algorithm is better because it genuinely understood my preferences and showed me the prospects accordingly. Bumble, on the other hand, was a hit-and-miss.

And what about the only guy in the group? Well, the heartthrob might be taken off the market soon; at least that’s what I get from his clipped replies to my uber intrusive questions.

Other features to look out for

Instagram and Spotify connect –  One of Yash’s favorite features.

I am an audiophile, and one of the easiest ways to my heart is a good playlist  and similar taste in music. 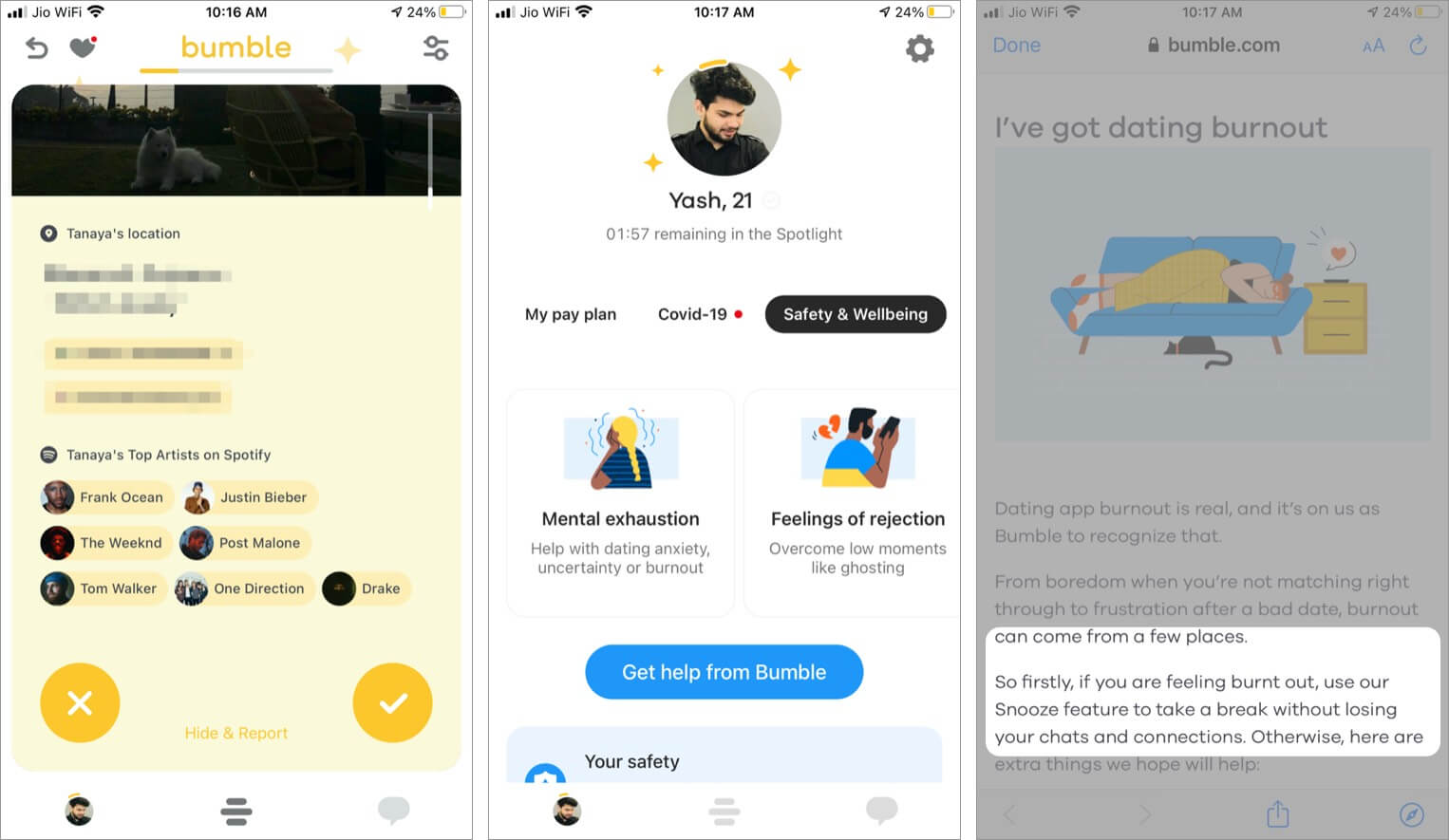 The BeeHive – Even though I was a mere observer here, this feature did grab my attention the most. Both on the web and within the app, Bumble publishes regular helpful articles.

The content variation is quite exhaustive, from suggestions on dating burnouts to success stories. This indeed shows that the developers care!

Well, unfortunately, my army was divided. Mehak & Nidhi enjoyed the overall experience with Bumble. They did meet some interesting people, but none of them struck the cord.

As for Harshanki, she is a tough cookie to crack. And while she enjoyed that women have the upper hand, she was irritated that people in her contacts were propping as a potential match.

Yash was pretty nonchalant; he loved some features but felt there is room for improvements as well. Both he and Mehak believes the messaging interface needs some improvements, like pinning chats.

And though I don’t have a success story to tell, I can happily say that my team enjoyed the week’s experiment with the app, and 50% (aka 2/4) of them would like to continue with the app.

Average rating from the team

What is Appy Week with AK?

A special series hosted by me, Arshmeet Kaur, or as the officemates call me, AK. I love apps and can get obsessively passionate about a helpful one.

And Appy Week with AK is an attempt to bring forward all facets of an app to my audience. So, they can decide whether to skip or download the particular app. And since a view is not enough, I test the selected app for a full week.

Please feel free to share your views, comments, and queries in the comment section below. I will see you next week with another Valentine’s-special app; till then, enjoy these previous editions: