Apple is an iconic company that has a rich and fascinating history. Whether it’s the revolutionary products or the visionary leadership of the late Steve Jobs, every aspect of this leading tech company has caught the fancy of people worldwide. If you want to get insights into the life of your favorite entrepreneur and the brand he pioneered, explore these must-read books about Steve Jobs and Apple.

This one’s the quintessential read for every Apple devotee and Steve Jobs fan. Published in 2011, this bestselling biography is based on in-depth interviews with Jobs and his close friends, family, colleagues, and competitors.

It tells the incredible story of how a creative entrepreneur revolutionized six industries, namely personal computers, phones, tablet computing, animated movies, music, and digital publishing. Given how Jobs valued creative freedom, he asked for no control over any part of this book. This resulted in a candid account, making it an excellent read for anyone interested in innovation, entrepreneurship, and technology.

2. Inside Apple by Adam Lashinsky

Inside Apple peeks into the inner workings of the tech giant. It’s a quick read that leaves you with exclusive information about how Apple innovates and what it’s like for people who work there.

Further, it gives a lot of food for thought by analyzing where Apple has been and where it’s heading in the post-Jobs era. Although it’s a bit old (published in 2013), it remains an intriguing read for anyone interested in learning about Apple’s inner workings.

Apple is known for the simplicity that defines its approach to design and innovation. It’s what has helped the company become as successful as it is. Ken Segall has played a significant role in Apple’s memorable marketing campaigns. This includes the Think Different campaign that featured iconic monochrome photographs of revolutionary people and events.

This book lets you vicariously experience what it was like to be in a conference room with Steve Jobs; how an obsession with simplicity paved the path for Apple to perform better every year.

This memoir by Steve Jobs’ daughter Lisa goes into intricate details of her father’s brilliant yet unpredictable ways. It is a beautifully narrated account of growing up in the 70s and 80s California when Silicon Valley was rapidly transforming.

Brennan-Jobs dives into the complexities of living with a father who was often severely judgemental. Unlike others, this book thrives on ‘every coin has two sides’ and offers a glimpse into the personal life of Steve Jobs as a difficult father.

5. The Bite in the Apple by Chrisann Brennan

Here’s another insightful personal take on Jobs’ life from his first girlfriend and co-parent to Lisa. This book delves into the story of the idealistic young man who dreamed of unifying the world through technology.

It sheds light on Jobs as a human, behind the scenes of his well-known perfectionist personality. It’s an ideal read for those interested in the psychological aspects of Steve Jobs and his complicated relationship with Brennan.

6. Tim Cook: The Genius Who Took Apple to the Next Level by Leander Kahney

Jobs left the world too soon, and his successor at Apple had massive shoes to fill. This book is about how Tim Cook lived up to that challenge and steered Apple towards even greater success under his principled leadership.

It compiles insights from several Apple insiders to recount the inspiring story of how Cook has carved out a growth story that few had thought possible. It’s a book that you must read if you want to know more about Tim Cook’s unique leadership that directed Apple to where it is today.

While Steve Jobs has been synonymous with Apple, many others played pivotal roles but didn’t enjoy equivalent limelight. Jony Ive is one such individual whom Jobs referred to as his “spiritual partner” at Apple.

Their collaboration gave the world some of the most iconic technology products, including iMac, iPod, iPad, and iPhone. So, this book is a must-read for everyone interested in the design aspect of Apple’s revolutionary products.

8. The Second Coming of Steve Jobs by Alan Deutschman

As the name suggests, this book narrates the story of Steve Jobs’ return to Apple and how he orchestrated the company’s outstanding turnaround to success. It goes into how Jobs blew away his critics and left his indelible mark on the company.

Although written in a journalistic way, it is full of drama and dirt that will keep you engaged. This book highlights Job’s multifold leadership traits which compelled people to overlook his negative qualities. Fans and admirers will especially enjoy reading this.

9. Revolution in the Valley by Andy Hertzfeld

In today’s digital age, it is easy to forget how revolutionary the first Macintosh computer really was. This book recounts its development right from an underground skunkworks project in 1979 to its iconic introduction in 1984 and beyond.

Moreover, it is written by someone who was a core member of the team that built the software and its radically new user interface. So, you know you’re getting an authentic narrative of what it was like to orchestrate and experience the birth of the personal computer revolution over 30 years ago.

Get privy to the story of how a man so reckless and arrogant as Steve Jobs went on to become the most effective visionary business leader of our time, impacting the lives of billions of people.

The interesting and compelling narrative is infused with unique stories from those who knew Jobs well, namely top executives at Apple, Pixar, and Disney. The authors explain Jobs’ behavior and offer context about his role in the technology revolution that has changed our world.

As the name suggests, this book offers a peek into Apple’s roller-coaster history, right from its founding to the impact of some disastrous executive decisions and then a return to profitability, plus recent forays into the music arena.

The author brings you exclusive insights from forgotten archives and interviews, along with tons of new photos, timelines, and charts. Further, it includes intriguing coverage of new lawsuit battles, updates on former Apple executives, and stories about Steve Wozniak and Pixar.

12. The Apple Revolution by Luke Dormehl

Silicon Valley was created by the “crazy ones” – young talented people who were all creative mavericks that changed the world. This book is their story, and it’s an enthralling read for all the geeks and budding entrepreneurs out there.

From Steve Wozniak, who built the first Apple computers, to Jony Ive, the young designer who imagined the iPod, and of course, Steve Jobs too – they all feature in this exciting account of the culture of Silicon Valley and how it fuels innovation.

13. I, Steve: Steve Jobs In His Own Words by George Beahm

This compilation stands out from the biographies and memoirs because it is about Steve Jobs in his own words. It draws the choicest quotes and insights from the creative genius over three decades worth of press coverage.

It’s a great way to understand Jobs’ perfectionist mind through anecdotes, mantras, and thoughts. It’s undoubtedly an essential read for anyone who seeks innovative solutions.

Check out on Goodreads

14. The Innovation Secrets of Steve Jobs: by Carmine Gallo

This book celebrates the life and legacy of Steve Jobs and guides you through applying his seven principles of innovation to any field, endeavor, or dream.

The book describes how Apple’s “Think Different” slogan was, more than a marketing tool, a way of life for Jobs. Highlighting its game-changing approach to unlock your creative potential, the book makes it to my list of must-reads for creative souls. 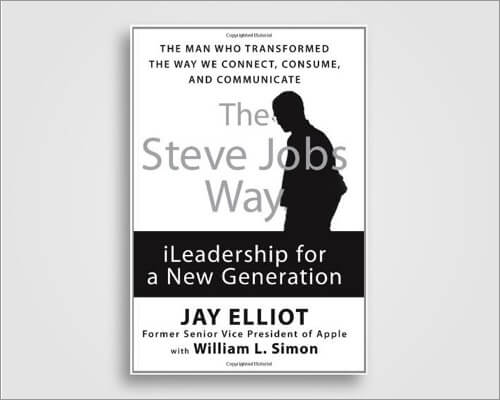 Yet another take on Steve Jobs written by someone who knew and worked with him. Jay Elliot was the former Senior Vice President at Apple. The Steve Jobs Way takes you on tour through Jobs’s intriguing career.

It accentuates Steve’s passion and devotion to simplifying complicated things beautifully. This book also offers a detailed analysis of Jobs’ leadership style, acknowledging his limitations without being negative.

The Inspirational Reading List of Steve Jobs and Apple!

Do you know of any other books about Apple or Steve Jobs that we missed out on? Share your favorites in the comments below.